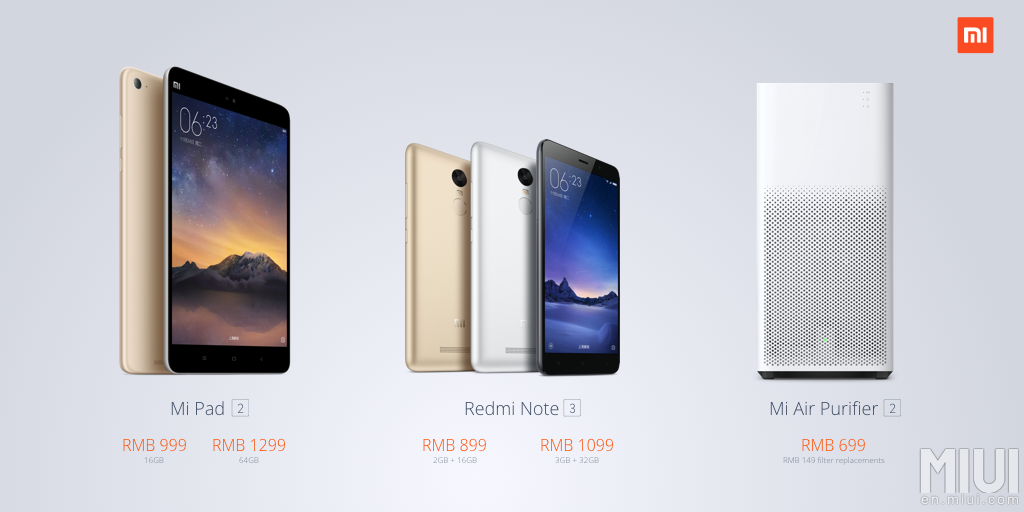 Xiaomi held a massively hyped event today in Beijing, at which we had been hoping the Xiaomi Mi5 would make an appearance. The launch of the flagship is long overdue and we were sure the company would launch it at today’s event. Unfortunately, we were wrong. The Xiaomi Mi5 wasn’t even mentioned at the event. Nonetheless, Xiaomi did unveil a couple of new devices that might be just as interesting as the Xiaomi Mi5 would have been – mostly because they scream premium.

The company refrained from divulging any information about what everyone’s most looking forward to, the Xiaomi Mi5, but the launch of the new Xiaomi Redmi Note 3 and MiPad 2 was still a very interesting development. The Redmi Note 3 is Xiaomi’s version of a premium flagship with an affordable price and it comes as a telling sign that Xiaomi is in fact losing ground in its home market. Announcing a new phone and entirely new packaging strategies for its physical stores, Xiaomi showed at the event (and after) that Huawei is becoming a threat on the market. Although Xiaomi still seems to be the leading smartphone seller in China on occasion, numbers are fluctuating and the company needs to ramp their sales up if they want to stay on top.

The Redmi Note 3 costs about $140 in China and comes with a 5.5-inch FHD display, Mediatek Helio X10 CPU, 2 GB RAM in the 16 GB model and 3 GB RAM in the 32 GB model. A 13 MP camera with touch focus and phase detection autofocus, as well as dual-tone flash is on the rear above the fingerprint sensor and a 5 MP selfie camera is up front. It’s a pretty neat setup, considering the price and the extra microSD card slot that Xiaomi added. We weren’t expecting that, not even from the Xiaomi Mi5. For a $140 smartphone, the Redmi Note 3 offers much more than anyone could have expected, With a premium design that reminds of HTC, Apple and Huawei, the Note 3 is a very impressive new phone and it almost manages to take the spotlight from the still anticipated and still unreleased Xiaomi Mi5.

There was another gadget that Xiaomi launched today, the Xiaomi MiPad 2. This device is essentially an iPad Mini, and even the promotional photos have a distinct Apple-vibe to them. The tablet comes with a 7.9-inch high-res display with a 326 ppi count, a full metal unibody that follows the thin and light design elements Apple adopted for its most recent tablet devices. Under the hood, there’s an Intel Atom X5-Z8500 64bit CPU, backed by 2 GB RAM and 16 or 64 GB internal storage. There’s a USB Type-C port for charging the massive 6190 mAh battery and the device has its own 8 and 5 MP camera setup on the rear and front, respectively. The MiPad 2 price is only about $157 in China, which is outrageously low for such a neat device. And it comes with Windows 10 out of the box, which is truly wonderful, in my opinion. The tablet, for this price, is pretty much paying for itself. Now, it’s up to developers to make the Windows 10 experience worthwhile.

Although today’s launch event did not show us the Xiaomi Mi5, it did give us two mobile devices that have very little chances of failing. With very affordable prices, premium design and good hardware within, both the Xiaomi Redmi Note 3 and Xiaomi MiPad 2 are two of the most affordable and well=balanced devices I’ve seen come out of China – and out of anywhere, for that matter. If these come to the US anytime soon (and they most likely will), their prices are expected to at least double, unfortunately. The Xiaomi Mi5 release date is now up in the air, although rumors about an early 2016 launch have already started rolling. We’ll be back with more.

Matt DavisSeptember 29, 2022
Read More
Scroll for more
Tap
Apple Pay debuting in China in February, banks getting aboard the mobile payments train
8 tech deals before, during and after Black Friday: GoPro, Tronsmart, Samsung and more