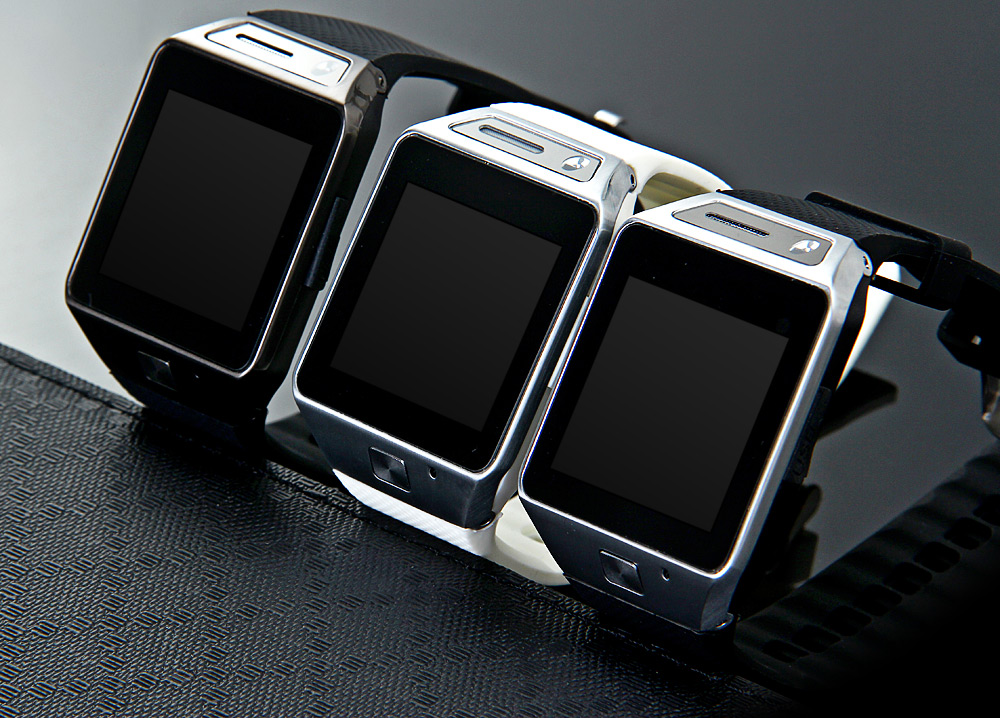 It looks like Chinese tech manufacturers have recently picked up on a new type of demand, one which might remind some of you of the early era of phones, when smaller was better. The smart watch is becoming more than just a fitness accessory, as more and more people notice Chinese devices like the GV08S, which fulfills all the functions of mainstream smart watches, and adds its own twist to things: a SIM card slot.

Having a SIM card slot, the GV08S smart watch is a blend between smart watch and smartphone. The independent device genre is getting more popular as people feel disappointed by the tethered options Apple, LG, Samsung and Motorola are giving them. The GV08S can act as a fitness monitor, a notifications center, a sleep monitor and a phone, with its own dialer. The best part is that the GV08S price is only $33.07 on EverBuying, which is quite a nice price for a device like this.

Since it has to be worn day and night for accurate monitoring, the GV08S smart watch is made out of metal with a rubber band. The rubber band rarely causes skin problems, which are frequent with wearable devices. Rubber, as well as other materials used in the Fitbit Surge and the Apple Watch band have made the news because of the rashes that they caused over long periods of wear. The GV08S is made of a soft, comfortable rubber which shouldn’t present users with such problems, as long as they don’t squeeze their wrists in too tight.

The GV08S smart watch comes in three different colors, black, golden and white, and all of them look proper futuristic. Note that the appearance of the GV08S will not be pleasant to those who love classic watch design, but rather to fans of Casio and of the Apple Watch, or Samsung’s rectangular wearables. The watch comes with its own VGA camera and microSd card slot, so one might say this device could be perfect for media hoarders.

A 1.5 inch 240*240 resolution OGS LCD display sits on the front of the smart watch and makes the user experience as easy as possible on such a small screen. The watch can be used to listen to music from its SD card, or through a Bluetooth connection with your phone. You can also connect various accessories through Bluetooth, making this small wrist phone as versatile as you would like it to be. Since it supports a SIM card, the smart watch can easily be used on hikes and during hours when your hands might be occupied or it would be impolite to take your phone out of your pocket.

A 500 mAh battery is providing the juice for the GV08S smart watch, and according to the company, battery life should be between a day and two, depending on how many calls are made and how long each call lasts. Bluetooth also impacts battery life, so if you’re planning on using that a lot, don’t expect a stellar battery life. Nonetheless, 500 mAh seems right for such a multifunctional device of this size. The smart watch features the standard sensors, like a pedometer, and it runs on its own proprietary software.

Although features like Wi-Fi, GPS, waterproof certification, Android, wireless charging and others are not present, the GV08S smart watch is not made for those. This device is made for those who need their pockets decluttered. Carrying a smartphone around at all times can be a hassle, and this little gadget can solve that problem. If you’re the type who’s always on the read, always busy, always working or just plain bored of the cumbersome menus they have to navigate on occasion, the GV08S smart watch might be a good fit. For its price, it’s actually a great investment in my opinion.