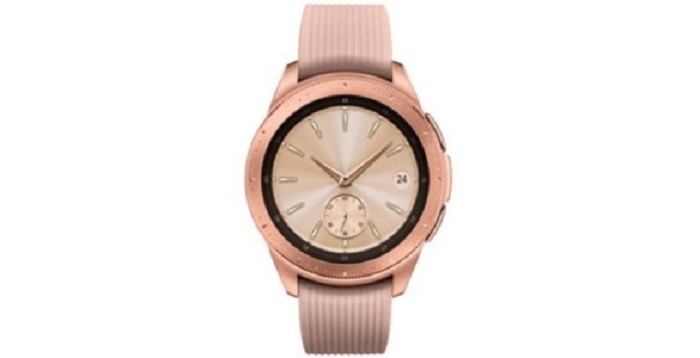 It looks like the cat has been let out of the bag early with the Samsung Galaxy Watch, which is the company’s own smartwatch. The leak comes from Samsung themselves (via CNET), as the Samsung website briefly had a page for the aforementioned smartwatch. Of course, the page has since been taken down.

However, anything that appears on the internet is never gone completely, and the details have since been archived. The listing showed a 42mm Rose Gold model with an accompanying listing number of SM-R810NZDAXAR. The page didn’t feature any information on the actual specs of the watch, though it looks like that information will be coming in the near future. Samsung is apparently going to reveal this new watch at the Unpacked 2018 event that’s set for August 9th.

Speculation on the smartwatch suggests that it could be running a new version of the company’s Tizen 4.0 OS out of the box. The voice assistant Bixby is also set to be supported, and the size is said to be similar to that of the Samsung Gear Sport’s 1.2-inch display. Rumor also has it that it could have a bigger 470mAh battery, whereas others say it might have a more efficient processor.