The Elder Scrolls 6 – Where will it take place? 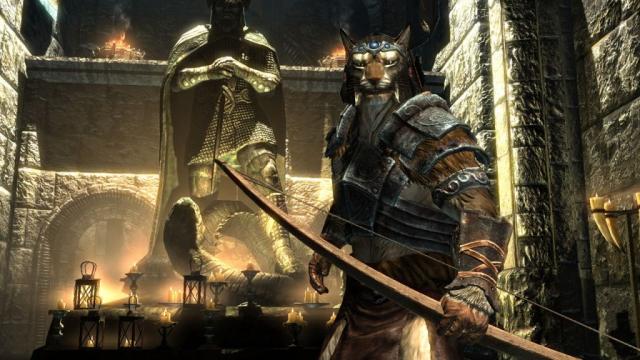 The Elder Scrolls 6 – Where will it take place?

It’s been more than four years since Bethesda first graced us with the epic trailer for The Elder Scrolls 5: Skyrim. You, me, and countless other gamers have played the fifth installment to death and enjoyed every moment of it, but I think we can all agree that it’s about time to start looking forward to its sequel. The Elder Scrolls 6 has not been announced yet, however, there are good reasons to think that this will likely change at some point later this year.

On average, a new major Elder Scrolls title is released every four or five years, with the only exception to this being Morrowind. Specifically,  The Elder Scrolls: Arena came out in 1992 and was followed by Daggerfall in 1996, Morrowind in 2002, Oblivion in 2006, and Skyrim in 2011. If this trend continues and unless Bethesda plans to make another exception, The Elder Scrolls 6 should be released either in 2015 or 2016. Another trend that needs to be mentioned is that Bethesda announces their new TES games long before they’re scheduled to release, which means that an official announcement for The Elder Scrolls 6 can’t be too far-off now.

As you may already know, Bethesda will be hosting its first ever E3 conference next month and have already confirmed that one of their showcased titles will be an RPG. Given that the company has finally decided to join the E3 madness we can only assume that something big will be revealed at the show and that could very well be The Elder Scrolls 6. The other option would be Fallout 4, another highly anticipated title that’s bound to steal any show. Ideally we would love to hear about both Fallout 4 and The Elder Scrolls 6 next month, but if I were to choose only one I’d definitely go with the latter since the fantasy series is much closer to my heart and has been for more than a decade. Which brings us to a very important question, where will the next installment take place?

There are still plenty of places left to explore in Tamriel

There are quite a number of untapped possibilities, each more exciting than the last. The continent of Tamriel features a total of nine different provinces and we only got to fully explore two of them up until this point – Skyrim and Cyrodiil. Although the third installment is called Morrowind, we actually only got to see the island of Vvardenfell and the capital of Mournhold in the Tribunal expansion, so there’s still quite a bit of the province that wasn’t showed yet. However, The Elder Scrolls 6 is unlikely to return to Morrowind as giving us a brand new province to explore makes much more sense. Speaking of partially explored provinces, parts of High Rock and Hammerfell have also been explored to some extent in Daggerfall, but just like with Morrowind, there are still plenty of places to see and it’s entirely possible that Bethesda chose of these two provinces as the setting for The Elder Scrolls 6. Having said that, I think it’s more likely that we will be treated with a region that wasn’t covered at all before and there are four perfectly good ones to choose from – Summerset Isles, Valenwood, Elsweyr, and Black Marsh.

Each of these four provinces would undoubtedly make a great setting for The Elder Scrolls 6, but some places are arguably better than others. As great as the last two games were, the lands of Skyrim and Cyrodiil seemed just a bit too familiar to my liking, unlike in Morrowind where everything was so alien and strange. I would definitely like to see a return to something a bit more unusual for the next installment. You may have heard some of the rumors claiming that The Elder Scrolls 6 will be called Argonia and take place in Black Marsh. Although there’s no evidence whatsoever to back these up Black Marsh would be a pretty good place to set the game in if you ask me.

We saw enough of the lands of men and mer (elves) in the previous entries so if Bethesda wanted to do spice things up a bit they would set the game in the lands of one of the beast races. As mentioned, the Argonian homeland of Black Marsh would make for a pretty good setting, however, the Khajiit province of Elsweyr would be even better for The Elder Scrolls 6. The problem I have with Black Marsh is that there doesn’t seem to be a whole lot of variety as the province essentially consists of just swamps and jungles. Elsweyr on the other hand seems a bit more interesting with its tropical environments, lush rain forests, and harsh deserts. The Khajiit culture and religion also sounds more fascinating than that of the Argonians, especially when it comes to their relationship to the moons Masser and Secunda.

Some Khajiit actually look more like mer than cats

It is said that the Khajiit actually come in a wide variety of shapes and sizes, ranging from common house cats to large tigers, and of course to the humanoid cats we are all too familiar with. I think it would be particularly interesting to see all these sub-species and learn more about how each of them fits into the Khajiit society. Don’t get me wrong, Black Marsh would also be a good setting for The Elder Scrolls 6, but if I could choose I would definitely go with Elsweyr. As for the other two provinces, I see Valenwood as the least likely choice again due to the lack of variety and also because I can’t imagine a good main story revolving around the peaceful nature-loving Bosmer for some reason.

The Altmer province of Summerset Isle is probably a much better alternative as both the people and lands seem to have much more to offer. The Altmer were largely portrayed as being the bad guys in Skyrim so having us experience their side of the story would definitely be very interesting. The high elves of Summerset Isle also have a long and rich history and their society is widely regarded as being the most advanced and civilized in all of Tamriel. Assuming The Elder Scrolls 6 picks off where Skyrim left off we should hear more about the Altmer and their efforts to claim Tamriel for themselves anyway. Giving us a better perspective on these people and learning more about their motivations would make for a very good story indeed. Although I would really love to have The Elder Scrolls 6 take place in Elsweyr, I have to admit that Summerset Isle would be the best location out of the four southernmost provinces of Tamriel.

Finally, it’s also worth mentioning that Tamriel isn’t the only game in town as there are a few other continents on the surface of Nirn, including the homeland of the dragons, Akavir. Akavir is a pretty mysterious place but its size is said to rival that of Tamriel and its inhabitants include monkey people, snow demons, tiger people, vampiric snakes, and of course, dragons. If Bethesda wants to go all out with The Elder Scrolls 6 then one of the provinces of Akavir would be the best place to do it. Granted, it seems very unlikely seeing as how there’s still so much of Tamriel left to explore, but a guy can dream, can’t he? Another way of dropping all sorts of jaws would be to have a story that involves the return of the Dwemer. A story revolving around the Dwemer would be absolutely incredible regardless of where it takes place, but let’s not kid ourselves, this sounds very unlikely at the moment. Would be nice to see in a future title tho.

Thus far all we know for certain is that Bethesda will be hosting their very first E3 conference next month and that one of their showcased games will be an RPG. I have a feeling that most people are hoping to see Fallout 4 at the event instead of The Elder Scrolls 6, but then again, why not both? Also, for those worried that The Elder Scrolls 6 will be delayed due to the Elder Scrolls Online worry not because Bethesda had very little to do with the MMO as the whole project was largely handled by Zenimax. In fact, announcing The Elder Scrolls 6 could hype people up and get them to play ESO just to get in the mood until the next major title launches, so that would be a win-win situation for both Bethesda and Zenimax. In any case, we’re bound to hear more during E3 2015, which takes place during June 16-18. Make sure to come by again for our coverage of the event. In the meantime, take another look at the Skyrim trailer below, for old times sake.