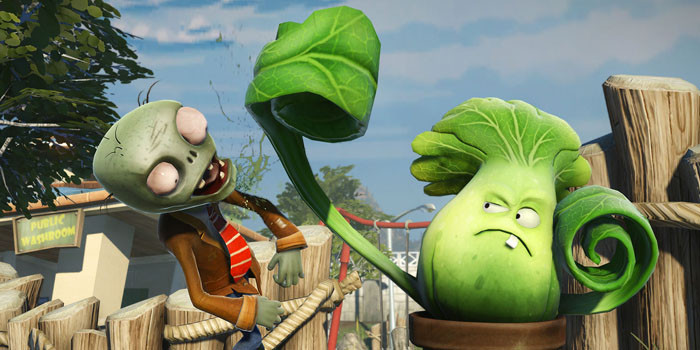 Plants Vs. Zombies: Garden Warfare was one of the biggest success stories EA has had in recent memory, spinning the Plants Vs. Zombies gameplay style on its head. Taking the tower defense style game and firing it into the world of team-based shooters. Creating a game an insane gameplay experience that is tough to match. The game was such a huge success that a sequel was only natural, but gamers believed that was a long ways off. Today EA and PopCap Games surprised everyone with a teaser trailer announcing Plants Vs. Zombies: Garden Warfare 2.

The teaser doesn’t tell us much about the upcoming sequel other than gamers should “get ready to soil their plant” showing the games comedy style hasn’t changed. Despite the lack of details the trailer offers its still exciting for gamers to know that a sequel to Garden Warfare is on its way. The strange thing about the announcement is that at the end it states that gamers will learn about the game at the Xbox E3 conference on June 15. Kicking off rumors that Plants Vs. Zombies Garden Warfare 2 will be an Xbox One exclusive.

Earlier this year Xbox Boss Phil Spencer did state that Xbox would be putting a bigger focus on exclusive third-party titles this year. They’ve made good on that promise so far, landing Rise of the Tomb Raider as an Xbox One exclusive, adding weight to the idea of Garden Warfare 2 exclusive deal. Building on that is a post from NeoGAF user Nirolak that shows EA’s projected launch dates that places Garden Warfare 2 in the fourth quarter for console and PC.

Since the game is being displayed by Microsoft instead of EA itself there is a good chance it will only becoming to the Xbox One, leaving PS4 and Wii U owners behind. Of course none of this is certain and could turn out to be nothing more than pre-E3 rumors, gamers will have to wait for the Xbox E3 conference on June 15 to be sure.