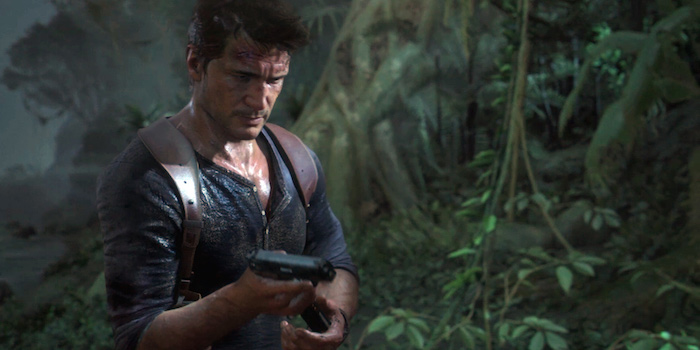 The Uncharted series has become a dominant series for the PlayStation since it first appeared in 2007. The Indiana Jones/Tomb Raider style action-adventure and puzzle solving gameplay has been irresistible to gamers right along with its story. Following the adventures of treasure hunter Nathan Drake, who has become a major mascot for the PlayStation brand. The treasure hunter and alleged descendant of Sir Francis Drake has become the favorite character of millions of gamers whose imagination he captured.

Now it appears that Nathan Drake’s days of searching for history’s greatest treasures will be coming to an end in Uncharted 4: A Thief’s End, judging by a recent tweet from Naughty Dog. In a tweet yesterday Naughty Dog Creative Director Neil Druckmann showed a poster of the famous adventurer over the Los Angeles Convention Center saying “looking mighty good for his last E3.”

Gamers have already been expecting that Uncharted 4 would be the last of Nathan Drake’s grand adventures based on the name A Thief’s End. Its been hard to imagine what else the developer would be hinting at, its doubtful they’re planning to end the Uncharted franchise itself with it still so popular. The franchise has still been growing in popularity so the end its hero seems more likely. The case for Uncharted 4 only being the end of Nathan Drake’s adventures is hinted at even more by the little devil at the end of Druckmann’s tweet, suggesting Naughty Dog has something special planned.

It would make sense to introduce a new protagonist to the Uncharted series at this point, with Drake getting older it might be time for a new adventurer to take his place. In fact gamers might be introduced to this new hero at E3 2015 or at some point in a Thief’s End storyline. Either way it will be interesting to see what Naughty Dog has to say about Nathan Drake and his next adventure at Sony’s E3 press conference on Monday June 15.