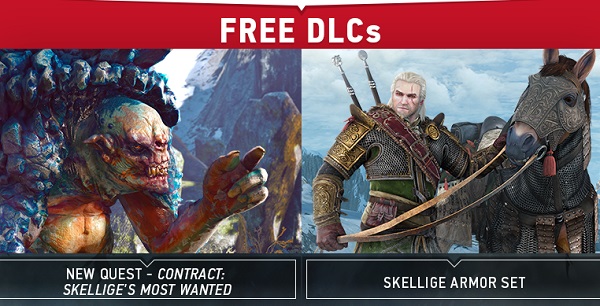 CD Projekt RED shared an image of the two DLCs on Twitter, hinting at what players will be in for. Apparently, the new Witcher contract will feature at least one rock troll, which in my opinion is fantastic. Any quest that involves one of those hilariously adorable critters is a quest I want to do!

As for the armour, it looks pretty standard. It’s not Witcher gear, but it looks like Geralt will also be able to dress up Roach with matching horse armour, so that’s something.

CD Projekt RED also said on Twitter that anybody who did not get last week’s free DLC pack will get it this week.

Last week’s Witcher 3 free DLC pack included a pretty but revealing dress for Triss (which those who’ve read the books will know Triss would never wear) and a new Scavenger Hunt quest for a new set of Witcher gear, the Wolf School Gear.

Patch 1.05 is also being released on consoles this week, with patch 1.07 set to come soon for PC. It’s a bit shorter than previous patches have been, but rest assured that CD Projekt RED have promised the next patch will be much larger.