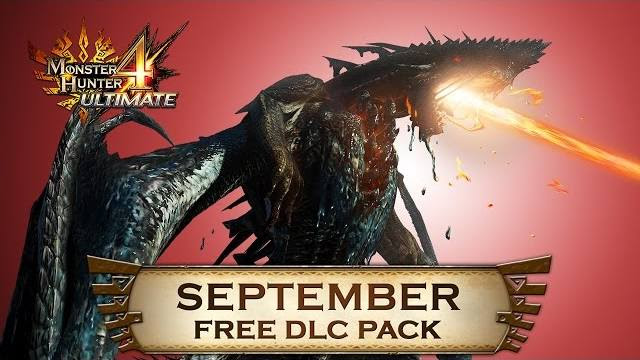 Monster Hunter 4 Ultimate, the latest entry of the Monster Hunter series released earlier this year in North America and Europe on Nintendo 3DS, has received extra content through free DLC packs that have been released monthly. September has begun a few days but we still had to hear about what was going to be introduced to the game this week. Thankfully the wait is now over and this month’s extra content has been fully detailed.

A few hours ago Capcom has shared a new Monster Hunter 4 Ultimate trailer, which showcases the additions included in this month’s free DLC pack. The pack includes a variety of new quests featuring some really powerful monsters and more. You can check out the trailer right below.

In just a few months Japanese players will be able to enjoy a brand new entry of the series. Monster Hunter X is going to come with plenty of new features that will make the game feel different from previous entries of the series. Yesterday some new screenshots have also surfaced online, showcasing one of the game’s new monsters and its lightning based attacks.