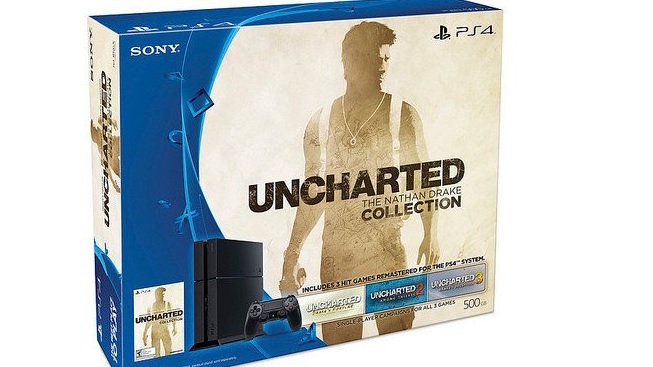 The Uncharted PS4 bundle, which contains Uncharted: The Nathan Drake Collection, is coming out on October 9. The package bundles a 500GB Playstation 4 console and The Nathan Drake Collection, which gathers the single-player campaigns from the first three games in the series. It also comes with guaranteed access to the beta of the upcoming fourth game, Uncharted 4: A Thief’s End.

The bundle is intended for those who still haven’t managed to get their hands on a PS4 console yet. Grabbing the bundle will start you off with the first three Uncharted titles added to your game collection. They’re the remastered versions of Uncharted: Drake’s Fortune, Uncharted 2: Among Thieves, and Uncharted 3: Drake’s Deception. As well as graphics upgrades, the remastered titles have also tweaked the controls to give them a more modern feel and fix some of the clunkiness from which older games tend to suffer.

The bundle has been confirmed for sale in North America only so far, which explains why there’s no 1TB PS4 option – seriously, when is the 1TB PS4 coming to America? There’s no word yet on when the bundle is coming to other regions, if it’s coming at all. It’ll be on sale for $399 and comes out October 9, the same day as the release date of Uncharted: The Nathan Drake Collection.

Uncharted: The Nathan Drake Collection also comes with beta access to Uncharted 4: A Thief’s End. The series’ fourth instalment was originally set for a late 2015 release but was recently pushed back to 2016. The current line from developer Naughty Dog is that it’ll be out in March 2016. The Uncharted series follows the stories of a group of treasure hunters as they traverse various corners of the globe to uncover ancient artefacts. Each instalment in the series has been well-received by critics and fans alike. If you’re in the market for a PS4, this bundle is well worth considering.