Leoric One True King bruiser/survival build – Heroes of the Storm 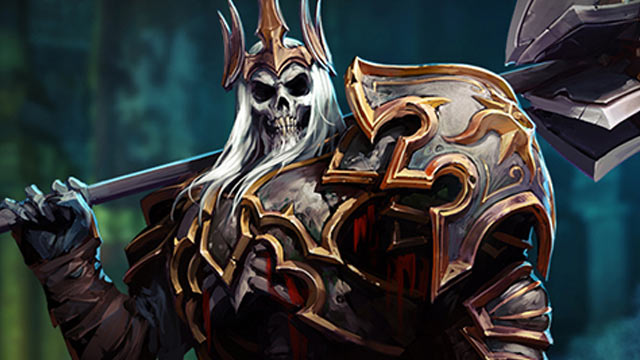 Leoric One True King bruiser/survival build – Heroes of the Storm

Leoric, also known as the Skeleton King, is a Warrior type hero from the Diablo universe that was introduced to Heroes of the Storm back in July. The Skeleton King is an extremely powerful hero in the right hands, which is why today we’re going to take a look at a build that will help you make the most of him. Though Leoric seems to be most useful as a tank at first glance, you can easily play him as a bruiser and inflict tons of damage to the enemy team while constantly healing yourself in the process. Heroes of the Storm has a number of characters that can pull off something like that, but Leoric is currently one of the best so I just had to share my One True King build with you guys.

Level 1: Reanimation. There are a couple of good options to choose from at level 1, but I found that Reanimation works the best. This talent increases your health regeneration by 1.5 every time you gather a Regeneration Globe. Naturally, this means that you’ll want to constantly keep on eye out and gather the globes as soon as they drop, but the hassle is definitely well worth it because you’ll be able to stay on the front lines where you belong for extended periods of time thanks to the regen boost. Leoric is quite capable of clearing entire creep waves with one swing towards the late game so gathering globes will become much easier as the game progresses. In addition, you can also pick up globes during Undying and regenerate (revive) faster.

Hopelessness is another good option at this level as it increases the range of Drain Hope by 20%, but at the end of the day Drain Hope is still a skill shot so pick Hopelessness only if you’re good at landing those. That said, I would pick Reanimation any day over the other options. Block is only helpful in certain situations and Mana Thirst is pretty much useless given that Leoric doesn’t really have any mana problems.

Level 4: Fealty Unto Death. Even though Hardened Bones seems like a better pick for a survival build, at level 4 I have to go with Fealty Unto Death. This talent heals 1% of your health and gives you 5 mana whenever nearby minions die, whether you’re the one killing them or not. Leoric can heal a decent portion of his health thanks to Fealty Unto Death and gain a bit of mana as well in the process. Willing Vessel is also a good pick as you can heal faster thanks to it, however, it again depends if you can land those Drain Hope skill shots or not. Meanwhile, Fealty Unto Death doesn’t require that you do anything special apart from just swinging away at minions whenever you need some extra health or just be in the area when stuff begins to die. Leoric also benefits from this talent during Undying, which is another advantage. Royal Focus should be ignored for the most part.

Level 7: Ossein Renewal. Fealty Unto Death already provides you with some extra survivability, but Ossein Renewal takes it one step further. This level 7 talent can be activated to give Leoric 20% of his health back over a period of 6 seconds, thus making him able to stay on the front lines even longer. If you’re playing a build that revolves around Skeleton Swing, then Paralyzing Rage and Ghastly Reach are both good options as the former increases the slow by a massive 60% while the latter increases the range by 25%. Both these options are good when you’re chasing opponents down, but they’re not all that useful if you’re trying to be a durable tank. Likewise, Lingering Apparition is useful only if you’re trying to escape or chase down someone and will not help you in a team fight. Similar to Reanimation and Fealty Unto Death, Ossein Renewal can be used during Undying to get Leoric back in action a bit faster.

Level 10: March of the Black King. As far as I’m concerned this should be a no-brainer. For a short time, March of the Black King gives you both extra damage and allows you to heal a portion of your health everytime you hit an enemy hero while swinging your mace. Leoric only swings his mace three times while this ability is active, but it’s enough to cause some serious chaos if you time it correctly. What’s more, March of the Black King also makes you unstoppable for its duration, so no need to worry about enemies interrupting your stride. Sure, this ability requires careful planning and its effectiveness depends on the enemy team composition, but in most situations it’s much better than the alternative.

The Skeleton King’s second heroic ability is called Entomb and it allows you to trap fleeing enemies for 4 seconds. I suggest picking this ability only if your team lacks a way of locking down a highly-mobile opponent, but even then, it’s worth noting that a lot of heroes can escape the tomb by using certain abilities.  For the purpose of this build, though, March of the Black King will be a better option any day of the week.

Level 13: Burning Rage. At this level your choices will not be all that great, but you can still make the best of it by going for Burning Rage. With this talent you can chip away at the health of all nearby enemies, which is particularly useful in team fights where every point of damage counts. Alternatively, you could also pick Crushing Hope for an extra 10% damage if you manage to hold onto an opponent with Drain Hope until it expires. Or, you can go for Drain Momentum and gain the ability to chase down enemies with Drain Hope without losing any movement speed. Both these abilities are very situational, whereas Burning Rage acts as a constant and much more reliable damage aura. Spell Shield could also come in handy, but it only triggers once every 30 seconds so it’s usefulness is pretty limited.

Level 16: Consume Vitality/Renewed Swing. Our first three talents (and to some extent the heroic) are all about healing and regeneration, however, there are a couple more talents that can help us stay alive. First off, you’ll want to get Consume Vitality as soon as you get to level 16 because this is a talent that allows Leoric to heal himself for 2% of his maximum health whenever he hits a target. At this point, you should be able to clear creep waves with ease so expect to see your health going up considerably with each Skeletal Swing. Keep in mind that Fealty Unto Death also gives 1% of your maximum health whenever enemies die around you and if needed, you can activate Ossein Renewal for an extra 20% health over 6 seconds. Naturally, Consume Vitality is great in team fights as well because you’re likely to hit at least two or three opponents and gain a bit of health back every time you hit Q.

If you feel like your team needs some more damage, however, you can always go for Renewed Swing, a straightforward talent that allows you to cast Skeletal Swing two times in quick succession, albeit the second swing only inflicts 50% damage. Renewed Swing goes a bit against the theme of the One True King build, but in Heroes of the Storm you often have to make decisions based on the situation so keep this talent in mind if you’re assassins are doing a bad job at putting the hurt on the enemy team. That said, I would still primarily recommend using Consume Vitality because it also works during Undying and is thus a more versatile talent. Undying Despair and Imposing Presence are the other two talents at level 16 and although they’re not all that bad, you’ll get less value with them than with Consume Vitality or Renewed Swing.

Level 20. Spectral Leech. In most cases at level 20 I pick the talent that improves the heroic ability, however, that is not the case here. Death March looks good on paper as it applies Drain Hope to all enemy heroes near Leoric, but only after he lands the final swing of March of the Black King. A lot of opponents will understandably try to get away from you as soon as you being casting your heroic ability so chances are that you’ll rarely get to benefit from the full effect of Death March. Meanwhile, Spectral Leech acts as life steal and is certain to activate whenever you hit an enemy hero with your basic attacks. After you reach level 20 and pick Spectral Leech your attacks will deal 5% bonus damage to enemy heroes and heal you for the same amount. Your third option is Hardened Shield and it also can come in handy if the burst damage from the enemy team is absolutely ridiculous. If you picked all the previous talents, though, you should be able to constantly heal yourself while fighting and Spectral Leech is the best talent to complement your kit.

Naturally, you can change things around a bit to suit your playstyle or depending on the situation, but I wholeheartedly recommend that you give this build a shot as it is and see how it works for you. If you have suggestions on how to improve the One True King build or if you want to recommend other Leoric builds make sure to tell us all about it in the comments section below. Also, check out my builds for Muradin and Zeratul (possibly a bit outdated now) and see how you like them.

Zach RileyJanuary 26, 2023
Read More
Scroll for more
Tap
The Witcher 3 Skellige Most Wanted Quest To Be Fixed On PS4 By Next Patch, No New Hairstyles Coming
Call of Duty expanding in competitions