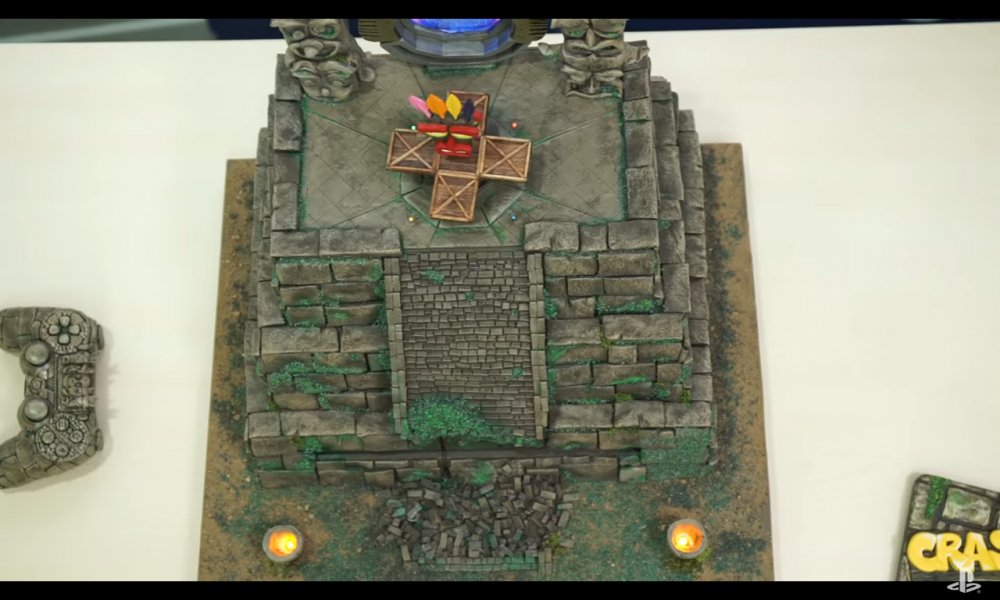 Crash Bandicoot made his return to the console industry with the remake/compilation “Crash Bandicoot: N.Sane Trilogy”. And it has been doing extremely well considering the early criticisms of it, just to celebrate this succesful launch. Spanish console modder MakoMod has made a very special custom PlayStation 4 based on the games of everyone’s favorite marsupial.

The console itself is a giant model pyramid with a spinning Aku Aku figurine in the middle. behind said figurine there is a portal like the ones Crash enters in the second installment Cortex Strikes back. Dubbed the “Temple Mod” by the creator, this is one of the most well crafted and creatively made console mods I have seen. The level of detail is impressive and for added effect, even the controller is modded!

The person responsible for these works resides in Spain, he is also responsible for creations like a The Legend Of Zelda: Breath of the Wild themed Nintendo Switch mod, which also looks incredible on its own. He also has made a few more projects under request and a lot of his designs have been featured in multiple magazines.

#SheikahSwitchMod is finally finished and available!
ALL THE INFO and HD pictures here: https://t.co/KSignDjm5C pic.twitter.com/WzxxJ57kB7

However, almost none of these are up for sale despite the creator being asked multiple times by various gamers to do so. And its understandable because the resources used for these creations must be expensive as well, and the amount of labor needed to be put into one of these also has to be really time consuming and innefficient. The Crash Bandicoot PS4 will be raffled by PlayStation Spain, it comes with an official video which you can take a look at here!

Personally, I would like to see even more creations like these with themes like Xenoblade Chronicles 2 and Dissidia NT, the creator Mako Mod definitely deserves a lot of praise for the amount of creativity, time and resources he spends on his modding work. It’s simply delightful and respectable