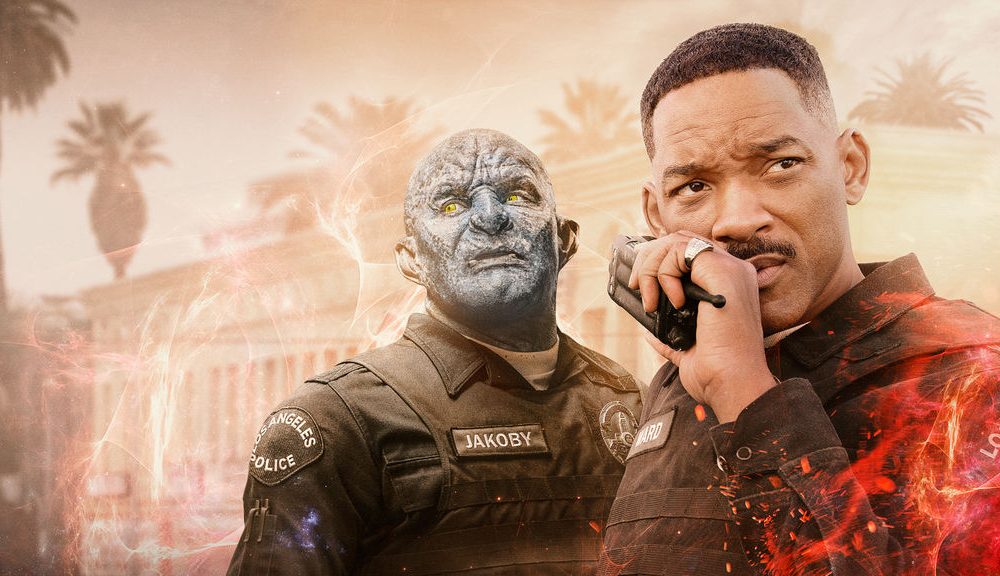 Bright is Netflix’s newest and most ambitious title to date, it melds a gritty buddy cop genre with high fantasy similar to the worlds of Lord of the Rings and Warcraft. This in itself is enough reason to take interest in Bright, such an ambitiously different idea could never go wrong. Well, it goes very wrong because the film is just plain bad. David Ayer (Suicide Squad) is at the Helm of the film and he teams up once again with superstar Will Smith. Smith plays a LAPD cop named Daryl Ward and he is partnered with Nick Jakoby, an Orc portrayed by the fantastic Joel Edgerton (Warrior). The film’s screenplay was written by Max Landis (Chronicle).

These two mega talents go to waste as the film is a messy take on a buddy cop action-adventure flick. One immediate problem with the film is there is virtually no world-building, as we get dropped into this cool, alternate fantasy version of Los Angeles with no real back story on events prior. All we know going into the film is there was a war between Orcs and humans two thousand years ago, and humans are belligerently racist towards them because of this old conflict.

Of course the film has elves as well, and they are considered the top of the race ladder, the rich Caucasian demographic of Bright’s version of America. Orcs, including Jakoby are treated like scum by the humans and especially Elves. The movie tries to force the topic of racism in many ways and I like that it has this theme throughout but it just doesn’t work when the writing is this poor and that it can’t be taken seriously.

Bright has an identity issue, it wants to be a gritty drama at times, but slips into bad buddy cop comedy territory with its cringe-worthy dialogue between Smith and Edgerton.  None of the films elements mix together which causes an absolute mess. The villains are another issue I have with the movie, they keep throwing them into the film with no real indication of who they are or their motive. They just plant a random bad guy in places and let the bad writing and over-use on slo-mo shots try to carry the scenes.

The main antagonist in the film is a cool looking, yet shallow elven woman named Leilah (Noomi Papace) who is after a special magic wand so she can bring back the “Dark Lord”, in which we never get much information on who this evil lord is. The film is about keeping a magic wand away from the hands of evil which is a been there, done that situation. For a film that has such a unique premise, there is actually nothing special or different about the actual plot. It is mundane and boring to its core, which is a shame because the world they created for the film is interesting in many ways.

One positive from this film are its visuals, which is has become a staple in Ayer’s films. The makeup/costume design is top notch and the visual effects during some of these action scenes are done well. It has the same visual grit that Ayer movies are known for while mixing it with fun magical effects that truly pop out.

To put it simply, Bright is an ambitious $90 million disappointment. David Ayer and Will Smith teamed up again  and made a movie that is sometimes worse than the Disaster that was Suicide Squad but here it is.  Despite the well-made visuals, there is still much wrong with the film as it lets talent go to waste with its bad writing and poor use of character.