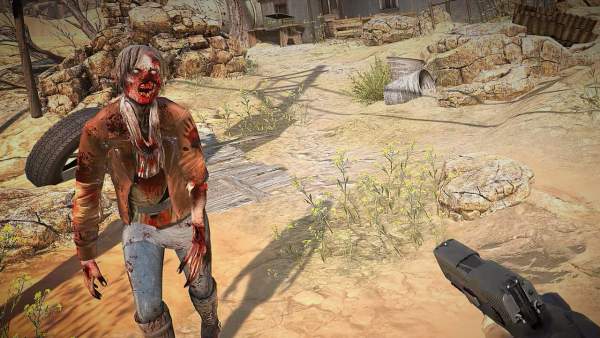 Remember the Vive? It’s the virtual reality headset Steam has been working on with HTC that was announced not too long ago. What made the HTC Vive sound promising was its room-scale user tracking feature, which allows it to track players movements within a small area. A lot of people have been waiting to see what developers can do with this feature, and today Vertigo Games has presented its answer with the reveal of Arizona Sunshine. Ever wonder how your zombie apocalypse games would look with a VR headset? Now you can find out.

Arizona Sunshine puts players in the middle of the desert during a zombie outbreak. Like any proper zombie shooter, players will have to go in search of other survivors, battle hordes of undead, and survive the intense desert environment. The game will take full advantage of the HTC Vive’s technology, using the motion controls to allow players to actually handle their weapons and inventories. “Step into the midst of a zombie apocalypse as if you were really there, and bash, slash and explode your way through hordes of undead close enough to touch,” Vertigo said in a press release.

It’s also designed so that it can be played over the course of several hours or in short intervals, which will be good for those who find themselves getting headaches after using VR headsets for too long. Check out the trailer below.

Vertigo Games has teamed up with Jaywalkers Interactive to develop Arizona Sunshine. They’ve said they plan to release the title in late 2015, which makes it sound suspiciously like it’s set to be an HTC Vive launch title, HTC and Valve having promised the VR headset will be released in time for this year’s holiday season. They have made the development kit for the HTC Vive free for developers to access.

Arizona Sunshine will not be Vertigo’s first HTC Vive title. The studio has also announced Skyworld, a turn-based strategy title, while World of Diving, its first VR project, is available in early access for the Oculus Rift. Arizona Sunshine is already up on Steam, with the release date set for sometime this year.