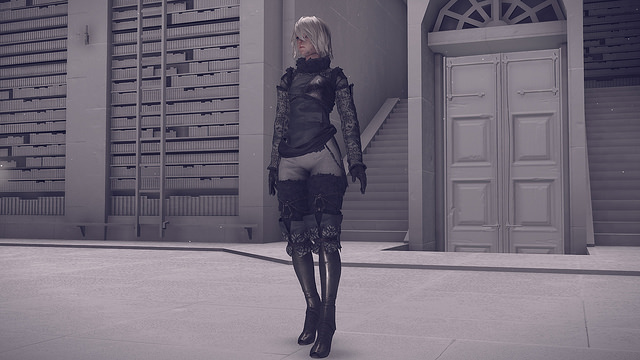 Everyone’s favorite spin-off of an old video game series, but with ties to an alternate ending in another title is getting DLC soon. It will fittingly be called 3C3C1D119440927. The new content for Nier: Automata will consist of skins, equipment, new battles, added music, and other cosmetic possibilities.

At the forefront of the recent announcement are new costumes for your lovable YoRHa androids: 2B, 9S, and A2. They will be inspired from the first Nier title which released back in 2010. There’s the Revealing Outfit, Young Man’s Outfit, and the Destroyer Outfit. You acquire them by defeating enemies and other challenges within three colosseums scattered across the in-game world.  Additionally, when you conquer new challenges and quests, you’ll also receive accessories that let you change the color of 2B and A2’s hair, masks that have equip effects, new tunes, and an item that changes the appearance of enemy bullets.

No release date was specified other than “very soon” and no price point was revealed. So we’re fully expecting the 3C3C1D119440927 DLC to be available tomorrow or next Tuesday. Also, for those that played the original Nier, the three aforementioned skins might as well be called Kaine and Brother Nier outfits.

How far are you in the recently released Nier: Automata? Have you completed the story at least once or are you going for the elusive platinum trophy? Any teary eye moments? Let us know in the comments below and tell us what future DLC you’d like to see!