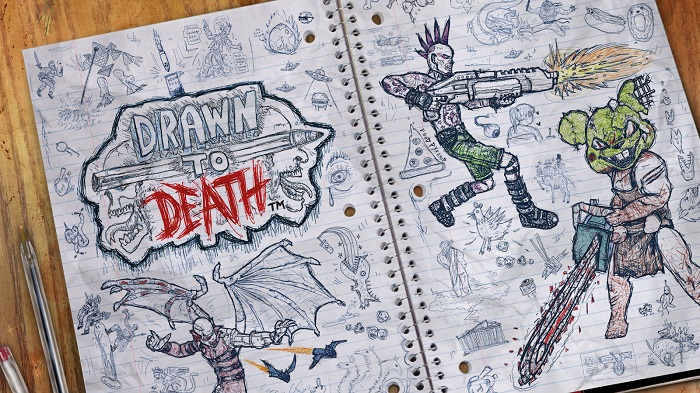 The Bartlet Jones Supernatural Detective Agency have been very hard at work tuning Drawn to Death since its release earlier this month. They’ve released a patch almost every week to fix the free PlayStation Plus title and seemingly haven’t taken a break yet. Same goes for today as update 2.08 has been made available.

You can download it at any time if your PlayStation 4 isn’t in rest mode. Update 2.08 removes some seasonal stuff from Easter and enhances a few of the game modes. Other than that some technical things like matchmaking fixes and character balancing. You can view the full patch notes below.

New Stuff
– Sweepstakes! Play 5 games for a chance to get yer mug in Drawn To Death!
– Easter promotion is over! Thanks to everyone for using the taunts and the feedback. Hope you got everything!
– No More Sessions in Ranked, Sessions in Unranked is Wide Open,. For Ranked this means less Team Deathmatch over all and for Unranked it means you can finally play it with up to three friends in all modes!
– TDM scoring is a bit more clearer within the winners and losers
– We are showing true MMR now
– Penalty for Quitting alert shows now it should be clearer now when you could potentially get dinged.

Tuning
– 7 Minute DM timing, Brawl is best of 5 (Organ donor stays the same)
– Soften up difficulty of Diabla mission for super wing jump
– Mode random % weighting has been tuned a bit to favor Deathmatch
– Removed Organ duel 1v1 from ranked/unranked rotations, only available in friendly.
– Matchmaking changes (45 seconds and it goes wide; 2 min count down)
– Better Teammate matching based on MMR for 4 individual players in a TDM
– New 2v1 Team Deathmatch Changes, abandoned dude gets: No health bonus, 45% damage absorption,1 extra pt per kill
– Monkey tunings:
– Reduced Devil monkey charge from 75 to 55
– Reduced Devil homing dmg from 60 to 40
– Devil bomb more frequent
– Bat Barrage Tuning:
– Time to Achieve 100% bats longer
– Russian Jackhammer has more spread when shot from hip
– Ninjaw Anchor faster but less hit collision
– Dafence grenade, reduced duration from 6 to 5 seconds.
– Laser Rifle Tuning: Reduce clip size from 70 to 45
– Devils Riff Tuning: Changing air bonus on Cybo from 2x to 1.5x
– You guys that have already played won’t notice this but we softened up the harshness of the frog in the training and defaulted the announcer to informative only. It’s an experiment of sorts… Again, you guys won’t notice it.
– Bugs
– “invisible bug” – Enemy in the white sky killer cam (as a victim it looks like someone killed you from the sky)

If reading isn’t your style and you’d rather listen to a ten minute video on the patch notes, watch the footage below. Other than that how are you liking Drawn to Death? Has update 2.08 fixed things for the better? Let us know in the comments.