PlayStation Plus Titles for May 2017 Are Actually Worthwhile (NA) 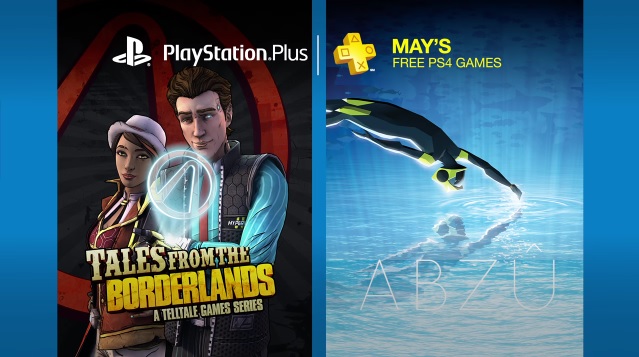 PlayStation Plus Titles for May 2017 Are Actually Worthwhile (NA)

Another month, another set of free PlayStation 4 games for PS Plus users. This time though the titles are actually worth it. I say that because PlayStation Plus has unfortunately gained a reputation for not offering a decent lineup these past few years. This changes for May 2017 due to being headlined by Tales From the Borderlands and ABZU. Both PlayStation 4 experiences will be available to download next Tuesday on May 2nd.

If you’re a fan of Telltale Games then Tales From the Borderlands is definitely for you. It’s considered cannon in the world of Pandora and takes place after Borderlands 2. The classic Telltale formula is present, but is arguably one of the company’s better outings. I realize that doesn’t mean much since most of Telltale’s creations are pretty awesome. Luckily, it appears this won’t follow A King’s Quest where only the first episode was available for PlayStation Plus users. Games will receive access to all five entries.

ABZU is a beautiful underwater exploration title that was created by the art director of Journey. It was met with near universal acclaim when it released back in August 2016. Personally, I was holding out hope that it would be a PlayStation Plus title because the twenty dollar price tag was a bit steep for three hours of gameplay. So yay me I suppose.

Technically, the PS4 will receive two additional entries for the month of May thanks to Cross Buy. The PlayStation Plus titles for the PS Vita consist of Laser Disco Defenders and Type:Rider. Again thanks to Cross Buy, you’ll be able to play it on your console as well. The remaining free games of May are Blood Knights and Port Royale 3: Pirates and Merchants for the PlayStation 3.

Are you happy with May’s PlayStation Plus lineup? Have you already played both advertised games? Let us know in the comments below!