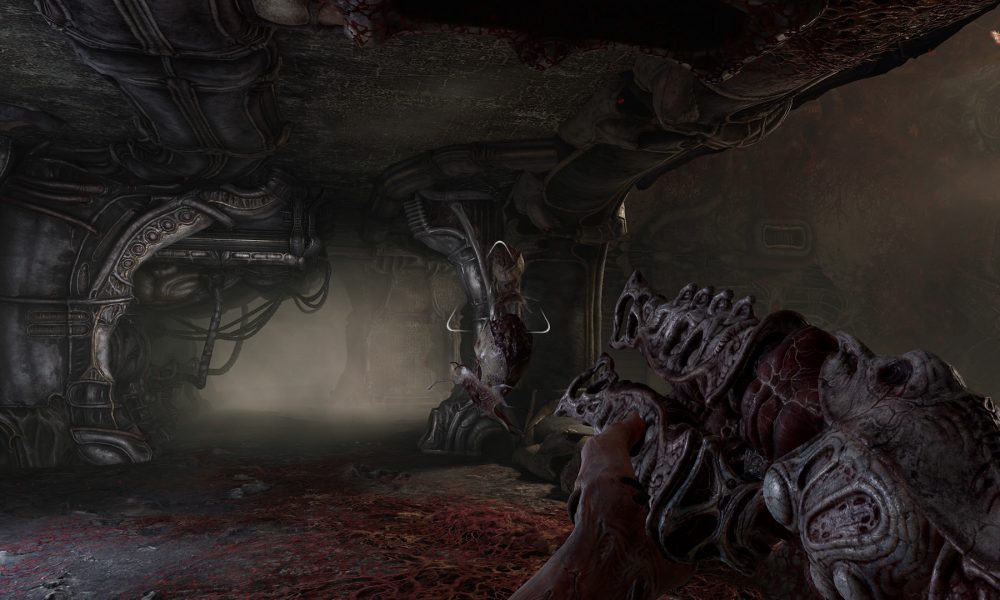 A little over a year ago, gamers got a taste of SCORN with Ebb Software’s announcement trailer. The video promised a foreboding world heavily inspired by H.R. Giger, otherwise known as “the guy who designed the Xenomorph in the Alien movies.” Players were excited, and for good reason, since the art was unique, at least as far as video games go. However, the trailer didn’t reveal much in terms of gameplay, which left gamers scratching their heads. Aside from being billed as a survival horror FPS, developer Ebb Software didn’t reveal much about SCORN; even the pre-alpha trailer that oddly predated the announcement trailer was devoid of meaningful information. But, fast forward to September 4th, 2017, and Ebb Software has finally dropped the SCORN gameplay trailer gamers have eagerly been awaiting.

As one would expect, SCORN looks disgusting, but in a beautiful sort of way. Ebb Software absolutely nailed the aesthetic it was aiming for, as the world looks like a great, big, massive organism that grew everything from ribbed, trachea-like passageways to pulsating, fleshy spires of unknown function. Even small objects such as door remotes and guns appear to have been grown instead of built. Sadly, I feel the weakest aspect of the gameplay trailer is, well, the gameplay, as it looks like a generic FPS where the player character moves and shoots slowly, not unlike other survival horror protagonists. However, the trailer demonstrates some unique mechanics, such as the aforementioned door remote that is able to lock enemies behind doors. I certainly hope Ebb Software has more aces hidden up its sleeve, because I would hate for SCORN to be nothing more than a generic survival horror game that tries to wow gamers with a unique art style and nothing else.

The gameplay trailer is not the only news regarding SCORN that landed today, as Ebb Software has also released a Kickstarter campaign for the game, or at least the first part of the game, because apparently it’s going to be split into chapters. Why is the news that Ebb Software is trying to obtain money for its game such strange news? Because, in August, the company announced it would publish SCORN, thanks to a partnership with Humble Bundle, which is also helping publish other indie games such as Ikenfell and A Hat In Time. Ebb Software admits on the official Kickstarter campaign page that despite its partnership, the company wants to acquire extra funds through Kickstarter to “polish the game and really make it shine” — an ironic statement given SCORN‘s fleshy aesthetic. Anyone who backs the campaign will receive a SCORN demo, regardless of pledge tier. Tiers start as low as €17 (approximately $20.25) and include HD wallpapers and a copy of the game. The highest tier, a massive €250 (approximately $297.81), includes the game, HD wallpapers, a digital world map, early access, a digital art book, a digital soundtrack, a printed art book, a t-shirt, a vinyl soundtrack, a canvas print, a limited edition USB flash drive, and a limited edition figurine. Ebb Software is asking for €150,000/$178,597 worth of funding and with luck will receive it; criticism aside, I am looking forward to SCORN.

Gamers who want to learn more about SCORN can visit either the official website or Steam page to stay up to date with all news and announcements regarding the game.

Zach RileyJanuary 31, 2023
Read More
Scroll for more
Tap
Marvel’s The Avengers Game Could Be A 3rd Person Cover Based Action Adventure Title
Splatoon 2 Might get A Competitive Mode