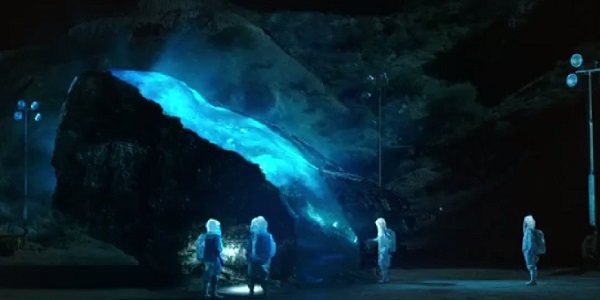 Featuring two new offerings from the Wachowskis, scary sequels, dinosaurs and Bradbury a la Spielberg, and zombie rom-coms from the “Gremlins” guy, June has a whole boatload of exciting  new releases for genre aficionados to appreciate. Here is the greatest list ever with all the must-see titles for 2015, or at least for June anyway. Let us know which of these you’re excited about, which of these seem like bad ideas and which you think will be most successful this year. We’re most excited about Jurassic World, because it can be two things: good or excruciatingly bad.

Based on the inimitable Ray Bradbury’s story “Zero Hour,” this Spielbergian series plots the course of an alien species trying to gain dominion over the human race by subtly controlling children’s minds. Sounds like these aliens conferred with 80’s cartoon producers before beginning their takeover.

Jupiter Ascending is one of the best new releases of 2015

Those Wachowskis sure have been busy. The first of their two releases this month is a sci-fi/adventure which follows Mila Kunis, an ordinary housecleaner who realizes she’s destined for greatness after bumping into genetically engineered bounty hunter Channing Tatum (one of this month’s themes—see Killjoys). Expect intergalactic hijinks to follow.

This is one of the most anticipated new releases of 2015

With a change in venue to Italy, the ever-diabolical gourmand continues the prequel to his reign of terror in the streets of Europe and his romance with the literately named Bedelia Du Maurier (Gillian Anderson). Perhaps this is where he discovered how delightful his famous liver and fava beans recipe matched with Chianti.

Sense8 is one of the best new releases on Netflix

In this new Sci-Fi thinker from J. Michael Straczynski (Babylon 5) and the Wachoskis, the minds of eight people are inexplicably linked. As a result, they are deemed a threat to humanity, and must race to avoid extermination. “The Defiant Ones” visit “The Matrix” on the way through “The Shining.”

New Insidious is one of the best new releases in 2015

Another round of ghastly fun, as a teenager trying to contact her dead mother conjures up something much, much worse—the unrated director’s cut of “Sharknado 4: The Sharkening.” Maybe not, but the scary franchise does offer up another round of Lin Shaye, which is always a good thing.

New releases from Marvel don’t get better than S.H.I.E.L.D

In case you haven’t been paying attention, this superhero stuff is big. “S.H.I.E.L.D” follows an elite group of super-agents around the globe as they try to stop super-baddies. Catch up with the superheroes cadre and their adventures on Netflix and Hulu before the third season begins in September.

Mark your calendars for hours of Sci-Fi fun. As season 3 begins, find out what happens as several newcomers resurrect the Omec overlords. The “Defiance” season starter is followed immediately by the television premiere of two former Stargate writers’ “Dark Matter,” a space adventure based on the comic of the same name.

Jurassic World might be the best new release in 2015. Or the worst.

In all likelihood, someone’s cup of espresso has ripples in it, and it raises no eyebrows—because they’re staying on a dinosaur-infested island theme park. Please someone tell me how this was a good idea? Didn’t you people watch any of the other “Jurassic Park” films? In all likelihood, CGI-dino carnage will ensue. This is the definition of popcorn flick.

Great new releases can be cartoons too.

In preparation for next spring’s reboot, Netflix is slinging all ten seasons of the quirky action/comedy into our nostalgia-hungry eyes. While I do have some trepidation with regards to a remake of a beloved childhood favorite, if they keep a surplus of classics on hand, it might reduce the symptoms of remake fever.

Who said SyFy didn’t have great new releases prepped for 2015?

From the auteur behind “Lost Girl,” Michelle Lovretta, comes a short-run series about interstellar bounty hunters and the men and women who love them (wait—that second part might be on Springer). The ten-episode spread promises action and smarm as three rogues seek outer space bail jumpers and criminals.

Sadly there aren’t many new releases in horror in 2015

Joe Dante returns to the horror/comedy genre (assuming he ever left) with a clever little story about an ex-girlfriend who simply isn’t ready to say goodbye, even after her untimely accidental death. Zombies may be a touch played-out, but Dante always manages to have fun with any genre he touches.

Dope (In theaters) June 19th (Revenge of a nerd drama)

Under the Dome Season 3 (CBS) June 25th (Which dome, the Astrodome? The Metrodome? Oh.)