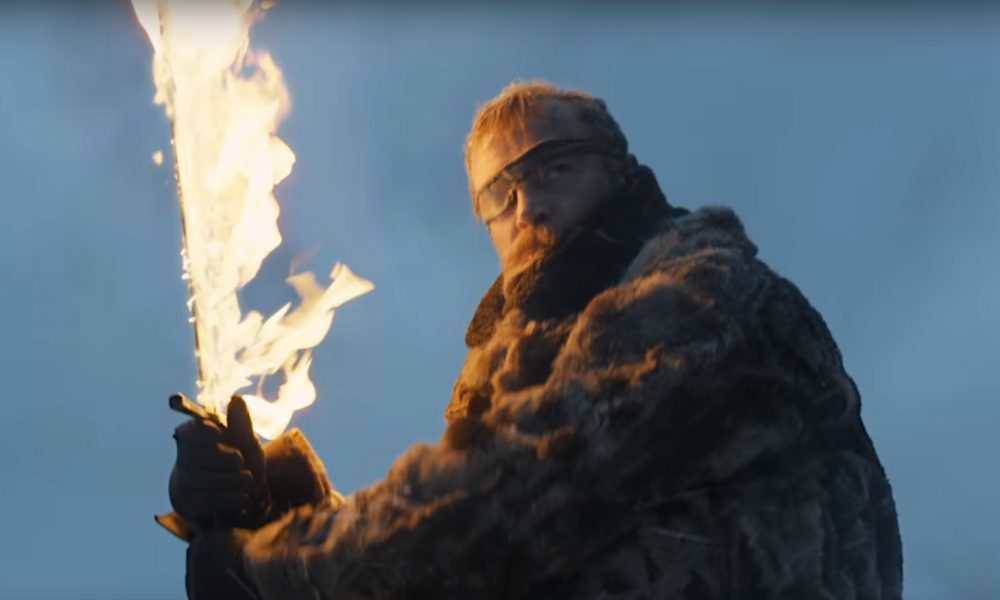 Earlier today, the official Game of Thrones Twitter page gave us all an unexpected gift. With a little under 4 weeks away from the premiere of season 7, a new trailer promoting it has arrived. The tweet read “It may be the first day of #Summer, but #WinterIsHere on 7.16 on @HBO. Watch the new Game of Thrones Season 7 trailer.”

*Breakdown of Trailer Below. Contains SPOILERS from Previous Seasons of Game of Thrones*

Before I begin, since this is the second trailer, I will omit details and shots that we already saw in the last trailer for Game of Thrones season 7. That being said, let’s dive into this.

The new Game of Thrones trailer opens up with a shot of Sansa with the Light of the Seven theme playing over the trailer. For those who don’t listen to the soundtrack, that song played in the season finale last year when Cersei blew up the Sept of Baelor with Wild Fire. The shot is narrated by Littlefinger. “Don’t fight in the North or the South. Fight every battle everywhere. Always. In your mind.”

The shot changes to gate at the Wall opening up and a another shot of a distressed looking Jon Snow covered in his namesake and wearing Wildling gear. The shot of Jon, however, looks to be taking place way farther north beyond the Wall considering the mountains in the background and later shots.

There is a new shot of Lannister soldiers marching through a crowd of people in King’s Landing while be cheered on by onlookers. Then a quick image of Cersei turning in what looks like intense anger to face someone or something that isn’t shown. There is a shot of boats landing at what appears to be the shores of Dragonstone. Then Arya is shown riding a horse with a shocked expression on her face. Jaime is then shot from behind walking with purpose on some castle’s ramparts.

We then get a typical Game of Thrones shot of a conniving Littlefinger creeping behind some walls in the dark. After a shot we’ve already seen, Daenerys is shown walking the shores of Dragonstone by herself, most likely contemplating something. She is then shown tearing down a Stannis Baratheon flag in Dragonstone in horror with Tyrion, who no doubt told her of his misdeeds. We then get a shot of all three dragons flying over Dragonstone. We get new angles of both Tyrion standing on the cliff side of Dragonstone and Theon looking frightened on what we now know to be a burning ship.

We get a shot of Grey Worm in his armor turning to face the camera to nod his head while standing outside what appears to be the same cave Melisandre gave birth to the demon baby in season 2. There’s then a shot of Brienne and Podrick walking through a snowy Winterfell. The Mountain is then shown in a battle scene surrounded by snow which appears to take place beyond the wall considering later shots.

Unsullied soldiers are shown being killed on the battlefield by arrows, confirming the Queen vs Queen battle that had been hypothesized by fans this season. What appears to be Dothraki soldiers are shown ramming a Lannister shield formation. A person with an unclear identity is seen jumping from the steering wheel of a burning ship into the inferno below to continue fighting. The ship is no doubt a Greyjoy one but it is unclear who is fighting who.

There is a shot of Jaime commanding Lannister archers in the same battle, suggesting either he stays by Cersei’s side longer than expected or this battle is very early on. A shot of a bunch of crows flying in the snow is shown with one being warged into by Bran no doubt. There is then a shot of the Night King reacting immediately to the crow, further evidencing Bran. There is then the current featured image of this article with Beric Dondarrion’s sword lighting up in fire while he is surrounded by snow. This adds further evidence to the Hound being beyond the Wall since he’s currently traveling with the Brotherhood and fire is a good way to kill Wights.

The entirety of the these last few shots is narrated by Jon Snow saying “For centuries our families fought together against their common enemy, despite their differences, together. We need to do the same if we’re going to survive because the enemy is real. It’s always been real.”

The Greyjoy navy is shown approaching Blackwater Bay and there are various action shots of Unsullied soldiers forcing their way into a place. There is a shot of Dany standing on the ramparts of Dragonstone looking distressed followed by Jaime riding through the battle looking furious. Tormund is quickly shown fighting beyond the Wall and a dragon is shown charging the Lannisters with the Dothraki. Yara and Theon are shown terrified of their ship on fire while there are further action shots from the rest of the two major battles. One highlight shot is Jon standing on a hill/cliff looking mortified of Wights World War Z-ing their way to him.

Missandei is shown kissing a defeated looking Grey Worm with various stressed looking shots of Tyrion, Jon Snow, and Davos shown. Jon is shown fighting another White Walker and Dothraki soldiers ride through what appears to be dragon fire. Theon drops to his knees on Dragonstone but is later shown ferociously fighting on his burning ship. There is then a close up of one of the dragons looking like he’s about to eat somebody.

The screen goes to black and when we expect to see the Game of Thrones logo, it then fades back in with a final series of shots and narration. Sansa recites what seems to be a poem saying “When the snows fall and the white winds blow, the lone wolf dies but the pack survives.” The trailer ends with a shot of Jon Snow’s back, suggesting he will die once more. The Game of Thrones logo is then shown with information regarding the release date and its social media.