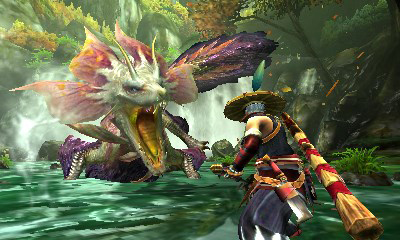 Monster Hunter X, the latest entry of the series created by Capcom, is now very close to its Japanese launch and new details on the game have been coming in almost every day since the beginning of the month. This week’s issue of Famitsu includes new details on some of the game’s monsters and today these details have been added to the game’s official Japanese website.

Last week Capcom has shown more of Monster Hunter X and the series spin-off title Monster Hunter Stories during the latest episode of Capcom TV. Also shown during the even was Resident Evil 0 HD Remaster, the HD remaster of the game originally released on Nintendo GameCube a few years ago.

If you have never seen Monster Hunter X in action and would like to know more about it, you may want to check out a rather lengthy Monster Hunter X gameplay video that has surfaced online back in September. The video is only available in Japanese but it’s not too difficult to understand what’s going on in it.

Monster Hunter X will be released in Japan on November 28th exclusively on Nintendo 3DS. The game has yet to be confirmed for North America and Europe but it would be surprising to see it not getting localized, considering the huge success of Monster Hunter 4 Ultimate, released earlier this year in North America and Europe. We will keep you updated on the game as well as on its Western release date as soon as more comes in on the matter so stay tuned for all the latest news.