About that Trump indictment story… 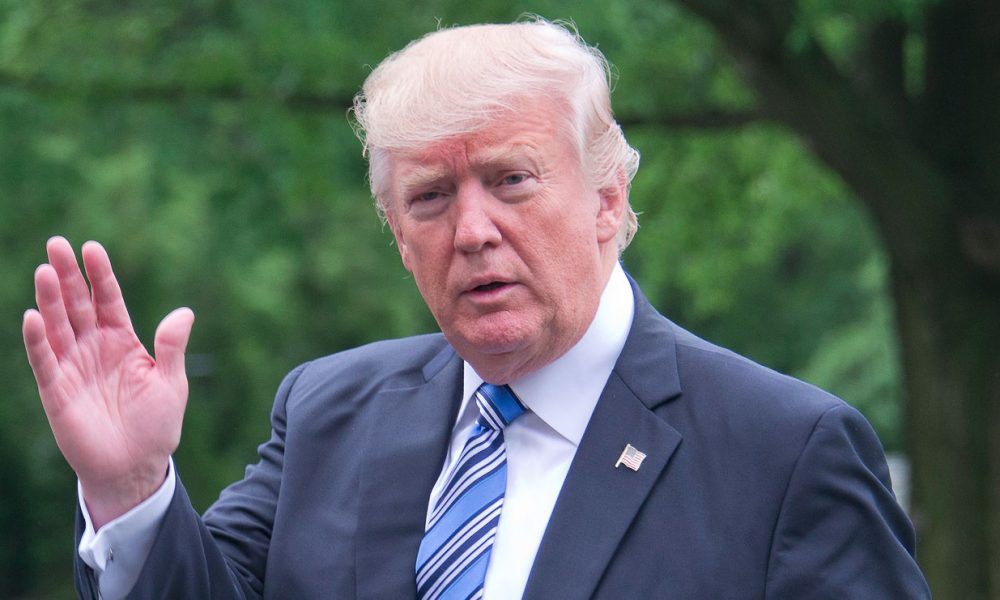 Last night, independent journalists Louise Mensch and Claude Taylor co-authored a post on Mensch’s Patribotics blog, a post which asserts that a sealed indictment has been issued against President Donald Trump for unspecified charges. Since their report, the Internet has been buzzing with speculation, arguments, and requests for verification. While no doubt the idea of a Trump indictment for an alleged role in Russian election interference or other crimes has many salivating, it’s important to take a closer look at this story and break down the basic facts and background behind it.

“Separate sources with links to the intelligence and justice communities have stated that a sealed indictment has been granted against Donald Trump.

While it is understood that the Supremacy Clause of the Constitution means that, until Mr. Trump is impeached, he cannot be prosecuted, sources say that the indictment is intended by the FBI and prosecutors in the Justice Department to form the basis of Mr. Trump’s impeachment. The indictment is, perhaps uniquely, not intended or expected to be used for prosecution, sources say, because of the constitutional position of the President.”

Soon after their post, the claims began to re-circulate online, especially after being reported on by Inquisitr, Raw Story, and Daily Kos. The Inquisitr article was shared to the /r/politics section of Reddit, where it immediately streaked to the frontpage with thousands of upvotes, before it was deleted by /r/politics mods for being rehosted content.

Beyond the bombshell-like nature of such a claim, many skeptics have latched on to two facets of the Taylor/Mensch story to criticize: the nature of what the Supremacy Clause actually does, and Taylor’s further claim in a tweet from last night that the indictment was issued by a FISA court.

Taylor would later issue a tweet thread retracting that statement, explaining that he had been mistaken over the details of which court issued the indictment.

He followed that apology up with a more detailed claim that indictments were prepared against “Trump, Manafort and Flynn—among others” by US Attorney Dana Boente out of the Eastern District of Virginia, a court frequently referred to as the “rocket docket” because of the speed with which cases typically move through its system.

Many skeptics have been crying foul because of the FISA court issue, but it should be noted that Mensch and Taylor’s original report does not mention FISA court, or any issuing court at all.

According to the metadata in the original article, it was posted just after 2:00am GMT on May 14th (or 10:00pm EST May 13th), and was edited at 2:41am GMT, as seen in the screenshot below. Did Mensch stealth-edit the post to remove an erroneous mention of FISA court?

This archive.is screenshot from 2:10am GMT shows the original article, which does not include any mention of FISA court. This screenshot from 2:57am (after the metadata indicates an edit was made) shows the exact same article text, but with a “read more” section with links added to the bottom of the post, and the author names linked. The screenshots can be seen side-by-side below.

This proves that FISA was never mentioned in the report by Mensch and Taylor. The FISA kerfuffle resulted from Taylor’s incorrect tweet, which he later corrected. All that aside, evidence gathered via a FISA warrant could be theoretically used by a grand jury convened within another court to issue an indictment, so it’s a rather moot point.

Next, let’s unpack the meaning of the second part of Mensch/Taylor’s brief article, which mentions the Supremacy Clause of the U.S. Constitution. The Supremacy Clause establishes “federal preemption”—that is, federal laws, treaties, and regulations generally preempt any related state or local laws/regulations. It doesn’t have anything to do with the arrest, impeachment, or prosecution of a sitting president. So while Mensch and Taylor are mostly right about the President’s constitutional privileges when it comes to criminal charges, the Supremacy Clause doesn’t enter into it.

Law professor Susan Low Bloch of Georgetown University authored a paper addressing this issue in 1997—“Can We Indict a Sitting President?” In 1998, Bloch testified before the House Judiciary Committee on impeachable offenses, and she later testified before the Senate on whether a sitting president could be indicted and tried. The question itself is a sticky one, which has many possible legal interpretations. On its face, Section 3, Article I of the Constitution suggests that impeachment must occur before any subsequent indictment, as asserted by Mensch and Taylor:

“Judgment in cases of impeachment shall not extend further than to removal from office, and disqualification to hold and enjoy any office of honor, trust or profit under the United States: but the party convicted shall nevertheless be liable and subject to indictment, trial, judgment and punishment, according to law.”

That being said, Bloch’s analysis of the question points out that “other punishments can be still imposed by the criminal process without violating any prohibitions against double jeopardy; [Section 3, Article I] may not be addressing the issue of order [of charges brought] at all.”

But can an official be impeached for actions which occurred before they took office? In 1873, the House Judiciary Committee made the determination that Impeachment “should only be applied to high crimes and misdemeanors committed while in office and which alone affect the officer in discharge of his duties.”

Despite this determination, later proceedings have ignored the 1873 decision. In 2010, Judge Thomas Porteous was removed from office by the U.S. Senate due to charges that stemmed from actions taken before he was appointed to the federal bench. Although the wrongdoing occurred before his appointment, the charges were directly linked to his service as a federal officer, which in the Senate’s view, made them Impeachable offenses.

Theoretically, such a precedent could be used to establish articles of Impeachment against President Trump, should it be shown that he participated in criminal activities related to his office, even prior to his inauguration. Mensch and Taylor are not entirely correct when they assert such an indictment couldn’t be used for prosecution in a criminal trial. To be honest, that question will probably have to be decided in court.

In Virginia, a grand jury must be empaneled to hear all felony charges. Grand juries also serve as an investigatory body—calling witnesses and hearing evidence before deciding if there is probable cause to issue an indictment. Claude Taylor was the first to report the existence of a grand jury related to the investigation, when he tweeted on April 28th that his sources say “two grand juries have convened and…one is almost complete.”  We now know that a grand jury does exist in the Eastern District of Virginia for the FBI’s Russia investigation, and on May 10th, 2017 CNN reported that the grand jury had issued subpoenas (orders to appear and/or produce documents) in recent weeks to associates of former National Security Advisor Michael Flynn.

Who are Louise Mensch and Claude Taylor?

Louise Mensch is a “chick lit” novelist and former Conservative MP from England, who retired from her parliamentary post in 2012 to move to New York with her family. After moving to the United States, Mensch became active in journalism, launching the center-right/libertarian news website Heat Street in April 2016, under the umbrella of Rupert Murdoch’s company, News Corp. Mensch was no longer leading Heat Street as of January 2017, but is reportedly still working with News Corp. on other projects.

In November 2016, just before the election, Mensch reported exclusively on the existence of FISA warrants against people tied to President Trump’s presidential campaign and (allegedly) Russia. The Washington Post later corroborated Mensch’s claim in April 2017, reporting that a FISA warrant had been issued several months before against Trump campaign adviser Carter Page.

While Mensch has been proven right before, it’s also important to note that she has developed a controversial reputation, and has made outlandish claims supporting various unproven conspiracy theories—such as Putin ordering the murder of Andrew Breitbart, that Stephen Bannon and his associates were behind the spate of Jewish community center bomb threats, and that Putin directed a catfishing scheme to entrap former congressman Anthony Weiner and thus plant emails from the Clinton campaign on his laptop.

Claude Taylor worked on the Bill Clinton campaigns in 1992 and 1996, and served as the director of the White House Volunteer Office during the Clinton administration. Taylor later turned to a career as a fine art travel photographer, and continues to reside in the Washington, D.C. area. As previously mentioned, Taylor has been proven right on the existence of grand juries, and he also was tipped off by a source about the FBI search warrant executed at an Annapolis GOP-connected campaign consulting firm earlier this week. While that warrant is reportedly unrelated to the Trump-Russia investigation, there’s no question that Taylor obviously has some reliable inside sources. On the flip side, Taylor has also made some unsubstantiated claims that haven’t been proven true or fully debunked—yet.

While they didn’t go so far as to back up Mensch and Taylor’s claims, both Republican strategist Rick Wilson and political commentator Keith Olbermann have pointed out that the pair have been correct in the past on the issues of FISA warrants and grand juries.

We’ve covered a lot of ground on this topic, so here is a tl;dr breakdown of the most important points, as well as some more information.

Taken as a whole, there is just not enough information to fully evaluate Mensch and Taylor’s report. It’s true that they have been correct before on some major scoops. It seems very likely that they both have valid sources within the judicial and intelligence communities. However, Mensch has damaged her reputation with some of the unproven conspiracy theories she has promoted in the past. Others point to Taylor’s erroneous tweet about FISA court and the error in their co-authored report about the Supremacy Clause as reasons to distrust their story. The reports of subpoenas coming out of Virginia under Dana Boente and the meeting with Burr and Warner are tantalizing, but not enough to be taken as corroboration. For now, it seems best to take a “wait and see” approach, as surely other news organizations are working to confirm this story with their own sources.

Taylor has also updated his indictment claim with new information: his sources are now saying upwards of 70 people are being targeted for indictment in the investigation(s). Again, this has not been verified by law enforcement, the Justice Department, or other media sources, but I feel it is important to include the most recent claims here.

Author’s note: I am not a lawyer or legal expert. As such, my understanding of the legal issues mentioned in this article may contain errors. If you have details or corrections to submit regarding this article, you may contact me via Twitter.

Andrew DoughtyDecember 5, 2018
Read More
Top 10 Games That Need to Be Rebooted
The WannaCry Ransomware attacks; Whose fault are they anyway?
wpDiscuz