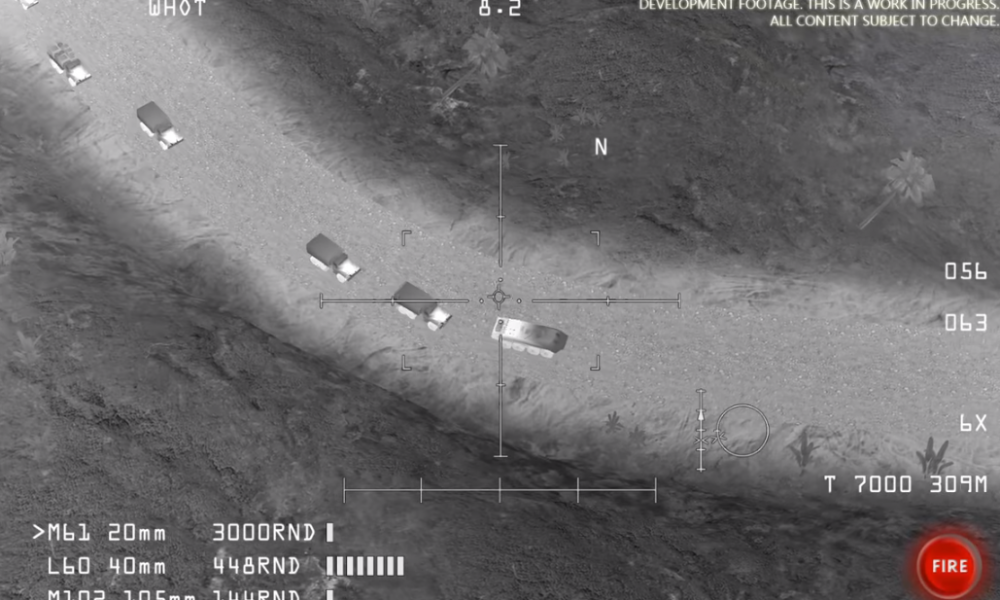 Propaganda is something we all have to deal with. Someone always wants to politicize something, be it using a church shooting to push gun control laws or to support the lack thereof or using a terrorist attack to paint every member of a religion as a dangerous extremist. Even video games aren’t immune from propagandization, although usually they fall into two categories: someone either claims a video game is part of an evil government conspiracy (coughAlexJonescough) or makes a video game to push an agenda. However, once every blue moon, someone gets the bright idea to use a video game and pass it off as real life for the sake of creating propaganda. It tends to backfire in the most spectacular of ways.

Yesterday, the Russian Ministry of Defense (MoD) posted several pictures on its Twitter feed and Facebook page and claimed they provided “irrefutable evidence” that the United States is aiding ISIS. One of the images is of some blurry-yet oddly polygonal vehicles:

Some might chalk this up to bad image quality, but many Twitter users, including journalist and researcher Eliot Higgins, saw it for what it was: a screenshot from the in-development (and possibly in development hell) mobile game AC-130 Gunship Simulator.

Another Twitter account, The Conflict Intelligence Team, discovered that wasn’t the only intentionally misattributed picture, as another was apparently taken from a 2016 Iraqi Ministry of Defence video:

Another alleged @mod_russia drone image accusing US of cooperating with IS was taken from a June 2016 Iraqi MoD video showing Iraqi Air Force bombing IS near Fallujah https://t.co/ybRbuAxA6w
(via @uckuduk1) pic.twitter.com/MtzjqAAStW

The Russian MoD has since removed all of its tweets and Facebook posts with the pictures, but you know what they say: nothing is ever truly deleted from the Internet. Other sites, including Kotaku and The Hill, have posted their own articles on this situation, and they all agree that the inclusion of these images destroys any credibility the Russian MoD had regarding its “the US is aiding ISIS” claims. But, the problems don’t stop there, as this isn’t the first time the Russian MoD has tried to pass off misattributed pictures and videos for the sake of propaganda. According to Gizmodo, in The Putin Interviews, Russian President Vladimir Putin showed Oliver Stone a recording of what he claimed was Russian forces fighting ISIS militants in Syria back in 2016. However, eagle-eyed viewers immediately identified the recording as a 2009 video (warning: it is graphic) of American forces attacking the Taliban in Afhanistan. While we do not know if Putin actually believes his own claim, the Russian MoD provided him with the video, which demonstrates the Russian MoD has a history of intentionally misleading the public in order to tell a narrative that simply isn’t true. This is indicative of the growing fake news problem and how the best solution to that problem is some good old research.

Zach RileyNovember 28, 2022
Read More
Scroll for more
Tap
FIFA 18’s Most Used Exploit has been Removed
Sketchy the Changeling Interview: A Critic and an Artist