Angry Father Destroys Republican Representative Over His Vote for Trumpcare 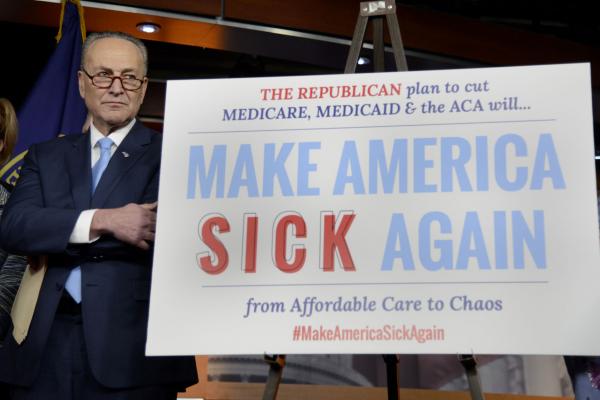 Whatever side you stand on, there’s no denying that President Donald Trump is wildly unpopular. With approval rankings tanking further and further each week spurred on by his increasingly radical and unpredictable behavior, “President” Trump might not be long for this world. However, impeaching Trump requires the cooperation of several Republican Representatives and Senators, so it’s far from a sure thing. Donald Trump has the potential to do a ridiculous amount of damage with the backing of a Republican majority Congress and Senate, and one harmful bill is the American Healthcare Act, or “Trumpcare”. At a recent meeting, an angry father ripped into his Republican representative for his vote for Trumpcare and his insight really reflects the dangers that this irresponsible and controversial health care act could do to the American public.

The target of the tirade was New Jersey Republican representative Tom MacArthur, who has been criticized by his voter base for his support of Trumpcare. An angry citizen has a lot to say to Representative MacArthur, expressing his family’s unique medical situation and how it would change for the worse if Trumpcare were to pass.

“You are the reason I stay up at night…My wife was diagnosed with cancer when she was 40 years old. She beat it, but every day she lives with it, she thinks about it. Every pain, every new something going on somewhere…’Is it coming back? Is this cancer?’…My children both have pre-existing conditions from birth…what happens if I lose my job?…[My wife] now has to contend with ‘What if my husband loses his job?’”

Many Americans echo his concerns, saying loud and clear that they won’t be able to afford private insurance if their breadwinners were to lose their jobs. It’s clear that Trumpcare is dangerous, with the plan heavily slanted towards the upper class. With insurances able to deny customers with pre-existing conditions, this is a life or death situation. Under Trumpcare, many people with die. Without a way to pay for medical care in the United States, you’re pretty much out of luck if you get hit with a serious illness or have a condition that’s not covered.

The video below featuring this angry father’s heartfelt speech is included below, but this is just one voice among millions that will be adversely affected by Trumpcare. More politicians, who are largely pretty well off, need a reality check. They hold the life of millions in their hands and choose to kill people to give the upper class and insurance companies a tax break. It’s a damn shame.