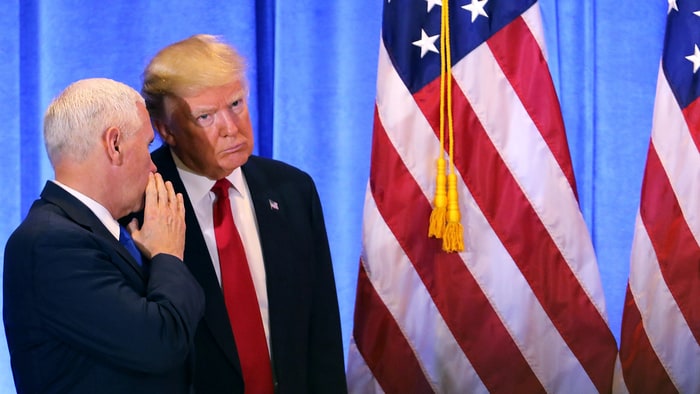 The evidence just gets more and more damning as times go on. The likelihood of our president getting impeached is not very high due to a Congress and Senate filled with his cronies, but as more ties between Trump and Russia keep coming out it’s going to get harder and harder to ignore the glaring issues, and maybe even treason, that plagued the trump campaign and his current position as President of the United States. A recent article from the New York Times detailed the Russian officials efforts to influence Trump aides during his campaign last year, and while this particular tidbit of news concerns his aides rather than the man himself, it’s just another sugesstion that Trump and Russia are synonymous in goals and that the Russian government played a large role in getting an incompetent man elected.

Last summer, American spies collected information that confirmed that top Russian officials were putting heavy resources towards trying to influence Trump aides. It’s become apparent that our president doesn’t really know what he’s doing and that on the rare occasions he actually cares about a situation, he relies on those close to him for guidance. Whether or not he actually takes reason into account before acting brashly is up for debate, but there’s no doubt that Trump is easily influenced. Ties between Trump and Russia may prove to be his downfall, as after a certain point it may be political suicide to keep ignoring the issues at hand. Only when they feel their seat is threatened will Republican senators try to do the right thing.

Russian officials were apparently boasting about how well they knew Michael Flynn, the retired general who served in an advisory position for Trump. Other conversations focused on Russia’s connection to “Viktor F. Yanukovych, the deposed president of Ukraine living in exile in Russia”. Yanukovych had connections to Trump campaign chairman Paul Manafort, and Russian officials remained confident they could use the relationship between Manafort and Trump to heavily influence his position on Russia.

The intelligence gathered regarding this potential cooperation, even indirectly, between Trump and Russia during the election was considered credible enough to pass to the FBI and it has been a subject of discussion during the investigation of our disgraceful President’s ties to an enemy.

Flynn’s ties to Russia are indisputable, and his insistence of the potential of Russia as an Ally during the Obama administration even after the annexation of Crimea led to his dismissal from the D.I.A. Secret documents have also come out detailing payments to Flynn from Russian companies amounting to over $65,000.

Paul Manafort insisted he would never help the Russians, but his ties to Viktor Yanukovych bring that assurance into uncertain territory. For more than a decade before the election Manafort worked with Russian-leaning political organizations in Ukraine, so the suggestion that he could be influenced by Russia is not out of left field.

While Trump was elected despite the majority of the country not wanting him as President, the ties between Trump and Russia combined with his unceremonious firing of Comey who was leading an investigation are causing his approval ratings to drop lower and lower. Soon enough, Republican representatives and senators may not be able to ignore the growing pile of evidence and we could end up with Pence as our leader, who while dangerous is at least not unstable and erratic in his actions.

Ule LopezApril 9, 2018
Read More
Angry Father Destroys Republican Representative Over His Vote for Trumpcare
Donald Trump Shoves Montenegro Prime Minister Aside to Get to the Front of the Line During Visit to NATO Headquarters.