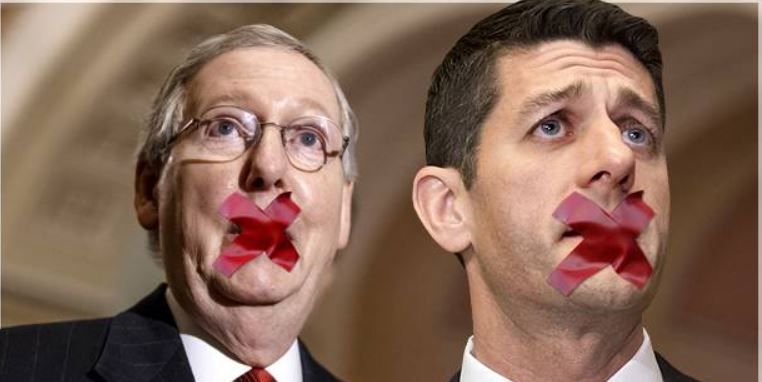 I am trying very hard to remain objective and wait for proven facts before condemning the Trump campaign/administration for the alleged collusion with Russia. I continue to wait for evidence even after the recent revelations by Donald Trump, Jr., regardless if his excuses change on a daily basis. However, while I wait for facts from Robert Mueller’s investigation, I am dumbfounded at the GOP’s lack of a response and Trump supporters’ continued rejection of a serious issue.

My incredulity grows hourly at the GOP’s blatant disregard about possible Russian interference in America’s presidential election. The Republican Party describes itself as the champion of American conservatism. What is more sacred to conservative values than the American democratic process? Furthermore, the GOP has a history of serious condemnation of communism and anything anti-democratic. The GOP was a strong supporter of Senator Joseph McCarthy’s investigation of alleged communists during the 1950s. The party continued by characterizing itself as the true champion of American democracy during the Cold War.

Treason for an Email Server but not for Collusion?

Nevertheless, the GOP has remained silent about alleged collusion between Russia and the Trump campaign. If the accusations are true, then we have a presidential campaign that willingly worked with a foreign government. But not just worked, actually used the information to manipulate the democratic process. Indeed, it is not just any government, but one of the USA’s primary adversaries. Moreover, democracy is a fundamentally conservative and sacred process that defines America and American values. And yet the GOP remains silent.

Conversely, they were quite loud in calls to prosecute Hillary Clinton for using an email server, and hers was a passive incident. Congressman Mike McCaul even accused her of treason for putting American security at risk. While her choice of using an improperly protected email server was not smart, the FBI investigation concluded that while hacking was probable, there was no direct evidence. In contrast, there is direct evidence that members of the Trump campaign/administration did, in fact, meet with individuals with strong ties to the Russian government.

Perhaps the party is too busy kowtowing to the President to realize the blatant hypocrisy their silence displays. In spite of the GOP controlling both House and Senate, the party has shown absolutely no backbone on pressing the Trump administration to provide information and answers. Vocal opposition to the alleged collusion is a perfect opportunity to show loyalty to America rather than to party. Indeed, the GOP representatives are not in office to protect the president. Rather, they’re in office to protect Americans and the sanctity of American democracy.

Trump Supporters – overall incredulity or absolute hatred of the other?

Trump supporters exasperate me even more than the GOP elected representatives. Yesterday, the organization Public Policy Polling released the results of a recent poll with astounding results. 32% of Trump supporters believe that the meeting between Donald Trump, Jr. and the Russian lawyer never even happened. Another 24% say that they’re not sure if it happened. If the Republican party touts itself as the protector of American democracy, it doesn’t appear that Trump supporters agree because 72% say that the Russian story is fake news. Even more revealing is that 64% are opposed to any kind of investigation. Further supporting this lack of support for the American democratic tradition is that 77% of Trump’s supporters say that even if the story is true and there is proof of collusion, he should still stay in office and not undergo prosecution.

American Democracy is a Defining Characteristic

I am at an absolute loss about how these numbers can even exist. The meeting did happen, something that Donald Trump Jr. has admitted and proven by his own tweets. It is horrifying to know that a large number of Trump supporters choose the president over the country. Choosing a leader over the country is not a conservative American value. Instead, such behavior is exactly what conservatives scold non-democratic countries for exhibiting. Furthermore, the large proportion of Trump supporters who do not think that there should be any penalty even if the story is true is appalling.

Let me get this straight. The same people who want to make America great again will look the other way if the investigation proves collusion with one of America’s premier adversaries. Such belief in no way helps make America great, it does the exact opposite and undermines faith in the system and the sanctity of the democratic process. In addition, it destroys American credibility in any future accusations about voting irregularities made against other countries. Likewise, it displays absolute hypocrisy and further proves the stereotype of the Trump supporter.

I cannot help but hope that there is undeniable evidence if the allegations are true. If the allegations prove false, I am still disturbed that a section of the voting public has chosen a man over the system. I do retain hope that soon somebody in the GOP will actually show backbone and represent the citizens.

What are your thoughts?