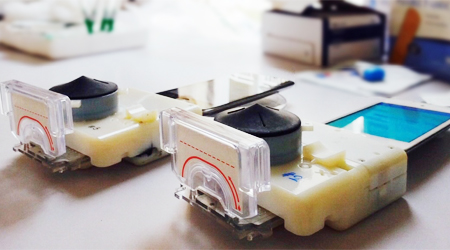 Engineers at the Columbia University have managed to develop a smartphone dongle for both iPhone and Android smartphones that can actually perform rather accurate biomedical tests for sexually transmitted diseases, including HIV. The smartphone dongle will cost just $34 to manufacture according to the biomedical engineers who have come up with the gadget and is able to replace medical equipment that costs well over $15,000. It’s a revolutionary discovery and the test only takes 15 minutes to complete, and the engineers say it can be as accurate as gold standard tests done in laboratories. You do need a blood sample, though, so it’s not for the squeamish.

According to the biomedical engineers over at Columbia University, the smartphone dongle in itself “demonstrates that a full laboratory-quality immunoasay can be run on a smartphone accessory. This low-cost dongle replicates all mechanical, optical and electronic functions of a laboratory-based enzyme-linked immunosorbent assay (ELISA) without requiring any stored energy; all necessary power is drawn from a smartphone”. That’s a pretty hard description to understand, but the gist of it is that health-care workers can now use a smartphone dongle to test for sexually transmitted diseases, including HIV. The training will reportedly only take half an hour.

9to5Mac and GigaOM picked up the story first, but the original report was published in the February issue of Science Translational Medicine. The photo you can see above is courtesy of Samiksha Nayak for Columbia Engineering and it shows the smartphone dongle in action. According to the engineers, the smartphone dongle will be plugged into the audio jack of any Android or iOS smartphone and will draw its power from there. It will also be able to access data through the connection, which is an admirable feat through an audio jack. The fact that the test is the fastest DIY test on the market and it can be used with any phone you have lying around is of extreme importance as these tests aren’t as easily done in parts of the world where technology, electricity and basic sustenance, for that matter, are scarce. Health care professionals will be able to use the high-tech smartphone dongle in centers to effectively and rapidly test patients for HIV and syphilis, lowering costs of equipping facilities like that, as well as bypassing the extensive training medical professionals need to operate standard testing laboratories.

Even though smartphone accessories haven’t been that widespread in the health department, that has been changed by the engineers at Columbia University and we finally have an effective, easy and cheap way to test for STDs all around the world. Even though HIV and AIDS don’t seem to be headline news any more, we can’t deny that the disease is one of the most devastating ones on Earth. Moreover, the fact that these diligent engineers could build such a portable, easy to use and cheap way to test for disease proves that further development will allow engineers to use the same components and processes to design test for other types of diseases in the future.