Flappy Bird, Snow roll or ZigZag which is more annoying 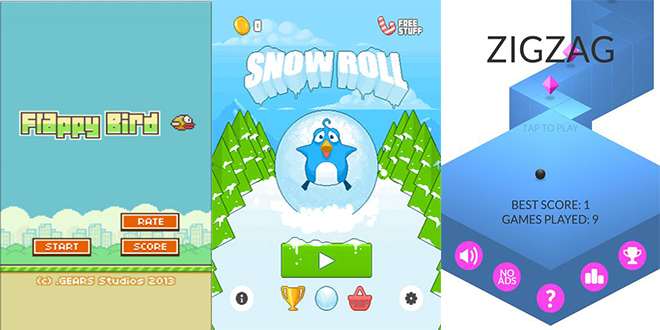 Flappy Bird, Snow roll or ZigZag which is more annoying

If your thumb still hurts from all the tapping, or recently had a mental breakdown, you’ve probably tried one of these maddening games: Flappy Bird, Snow Roll and ZigZag. Flappy Bird is relatively old but when it appeared in 2013 it became popular very fast. At first glance it seemed a very easy game even a toddler could play it yet it required so much dexterity that surviving more than a few seconds was almost impossible. There is something with birds and tapping that creates an annoying reaction to those who play.

Basically, all of these three games are endless runners, where your character can only move diagonally and is controlled by tapping. Because ZigZag was developed by Ketchapp and released in the same day that the Snow Roll’s creators wanted to release their frustrating game, HappyMagenta decided to add more features. ZigZag is a 3D styled game were you control a ball on a very challenging road and collect pink diamonds. Initially Snow Roll had the same idea only they had a bird on a snow ball trying to avoid all kinds of obstacles while collecting coins. To make Snow Roll even more complicated they made it so that your previously crashed snow balls become obstacles in the next game but they also added some power ups which help you survive for a brief period of time. The coins you earn can be bet on a shell mini-game where your reward is another snow ball design.

Do you want a new phone? this is how you can make that happen, download Flappy Bird (iOS, Android), Snow Roll (iOS) or ZigZag (Android, iOS) and just start play one of these God forsaken games and shortly you will throw your phone off the window or into a wall (or you’ll bend your iPhone over) , easy as that. Let me know if you tried one of these “horrible” games and tell me if your phone is still in one piece.