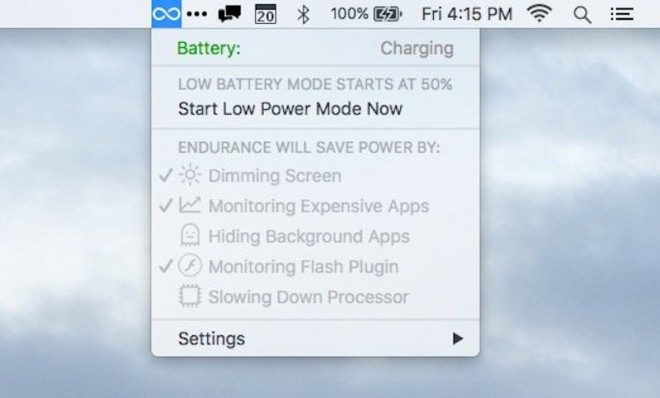 Do you ever get angry when you still have a lot of work to do on your MAC and realize that you don’t have enough battery left to finish anything? Everybody had at least one of those moments in their life, and it is quite infuriating. But Magnetism Studios have found a solution for that, they’ve developed an app called Endurance that will extend your MAC’s battery live with 20%.

An app that will make your battery last longer is probably the dream that every MAC enthusiast has ever had. The process is simple, Endurance will put your MAC into a low-power mode by reducing the brightness on your screen, it will alert you if you are using an app that uses too much power, it will block Adobe Flash when it is not purposely used and basically, it will shut down all the unnecessary apps to maintain your battery life.

Also, the app will begin to save your battery when you are at 70% battery life but of course that the feature can be changed to as low as 15%, it depends on what you are doing on your MAC and how much power the processes require.

You can already download Endurance from its developer’s website and try it out for free for 7 days. If the app proves to be as efficient as it promises, you can keep on using it for $12.99. It is not the cheapest app, but if you usually need to work on your MAC while traveling, Endurance might extend your battery life enough so you can reach any impossible deadline.

Google Play had a mobile virus which infected millions of Android users and is still affecting thousands each day
Skype 6.6 for iOS makes multitasking more approachable