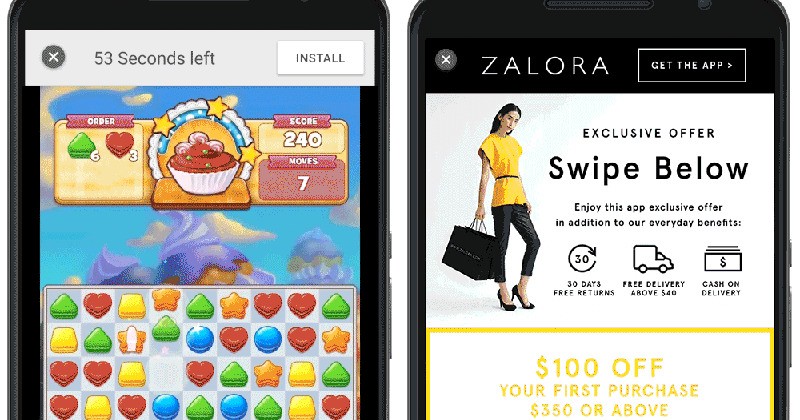 In a scenario rather close to what South Park demonstrated in episode 9 of season 19, Google has just introduced a new type of interactive ads. These game ads that developers will be able to make use of will allow users to try an Android app or game before installing it, albeit only for 60 seconds. The idea supports the ongoing effort on the part of Google and developers to bring more engagement to the apps and games they publish in the Play Store.

In a blog post Google described the new Adwords tool as being the next step in user engagement and marketing, and the ad of the future, of course. In South Park’s Cartman, Kenny, Kyle and Stan as well as adults get lost in the world of ads and distracted from the content they are searching for, but Google says the new interactive ads will help make people good decisions about what they’re installing and developers to better understand the userbase they are creating for.

Interactive ads are essentially inception in the world of ads, seeing as you will be able to see a free to play game with all the ads that it serves in-game, within an ad that you view before you install the game. Or that would be the funny way things could go. More likely, developers will pick the parts of the game that are most interesting to play or the functions of the app most people will find useful and showcase them in their best formats to get people to install the app or game upon trying it for 60 seconds.

These in-app interactive ads are called the Trial Run Ads and according to the blog post, they represent immersive ads at their finest, all the while promising more relevant ad clicks, app downloads and pre-qualified app users. It’s a nice idea in my opinion, because this way we can see if a game or app is actually what we’re looking for or not. I just think developers might take advantage of the ad format and be a little false with what the entire game or app experience is about. Do you think you can tell if an app or game is good for you based on 60 seconds of trying it out within an advertisement?

Another new tool developers are getting to help monetize their interactive ads better is mobile customizability. These new ad formats are called interstitial ads, HTML5 ads that can be customized by developers according to what advertisers want. Featuring dynamic data pull and customizable functionalities that are supposed to be engaging to users. An example Google shows in the blog post demonstrating interactive ads and interstitial ads showcases how a full screen ad requires the user to swipe in order to reveal the part of the ad that is hidden.

These new advertising tools are targeted at developers and Android users will see a few months pass before seeing them being implemented on a large scale. A few partners of Google are already using interactive ads, but developers are just now getting limited access to the new ad formats. Although mainly targeted at games, app developers can also make use of interactive ads to let users try out photo editing apps for example. That would be my wishlist.

Interstitial ads are more suited for apps than games, as Google explains that the new ad formats are supposed to allow users to experience how the app is supposed to help them on a daily basis. All these things are good and interesting, but the consumer browsing the internet should still be aware that these interactive ads are still just advertisement. Both trial run interactive ads and interstitials are in beta, and those interested in getting a hold of them should contact their account managers, according to Google. What are your feelings about these new ads? Do you think they have potential to be very misleading or do you think they’ll improve the ecosystem on the internet and help users be more comfortable with freemium business models?