The VR headset: still not stylish just like Back to the Future II predicted 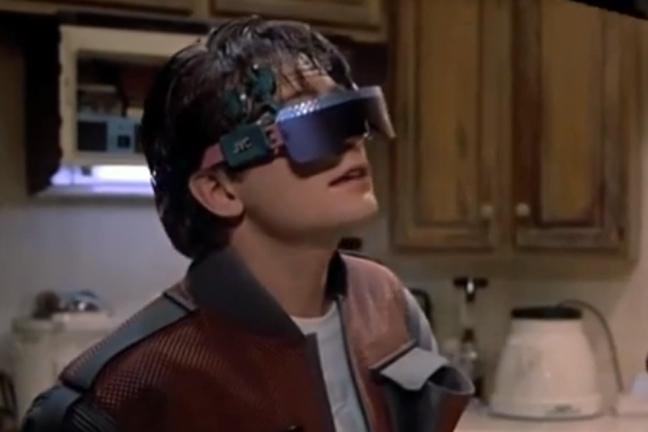 The VR headset: still not stylish just like Back to the Future II predicted

Ever since Back to the Future II’s uber futuristic glimpse of what life could be like in 2015, the technology comparisons have been running rampant. While the movie’s predictions have some obvious hits and misses, thanks to Sony’s SmartEyeglass, I realized that the 1989 film was right about one more thing. There are no stylish VR headsets available today. This epiphany came on the heels of the announcement that Sony’s answer to Google Glass was now for sale. After checking out Sony’s SmartEyeglass, my first thought was that not a single person would ever take me seriously while wearing them.

I mean, could you blame them? I’m certainly not the most fashionable person around, but I can’t possibly be alone in thinking that not a single person would look normal while using Sony’s SmartEyeglass. Besides the overlarge square design that wouldn’t flatter even the most genetically blessed among us, I think the thing that gets me most is that its bulky retro-ish styling detracts from its usability. Despite the dizzying number of potential uses, I just know it would bring a lot of (unwanted) attention that would keep me from wearing them. And that’s a huge bummer. Especially since you know that Sony tried their best to make them as stylish as possible. Perhaps they’re going for the nostalgia market since the vintage black frame look of the $840 SmartEyeglass will only offer the classic green display of those old monochrome monitors.

Sony is bringing back Monochrome in 2015

The future’s not that bright, either. I find myself liking the ultra futuristic look of the now defunct Google Glass about as much as I like the thick black styling of SmartEyeglass. While I can appreciate the minimalist approach that Google’s designers took, I can’t help but think that it looks like something a pretentious architect would wear.

Was this the Google Glass target demographic?

I mean, granted, Google Glass offers a full color display unlike Sony’s SmartEyeglass but even with the barely there frames, I know that I would still feel a bit weird rocking a pair. I guess, to me, it almost looks like a bluetooth earpiece for your face. And as amazing and revolutionary as the Microsoft HoloLens promises to be, you have to admit that there is still much to be desired when it comes to the looks department.

Microsoft HoloLens augments reality but not your looks

I’m not saying that the VR headset from Back to the Future II is the best thing around; far from it, in fact. What I am saying is that, if given the choice, I would pick the silly Back to the Future glasses instead of the HoloLens or Google Glass. Why? Well, I think Back to the Future II totally got it right: they embraced the inherent awkwardness of VR glasses instead of trying to fight it. I know it’s not an easy task to design good looking virtual reality and augmented reality headsets, but we must be able to do better, right? And yes, you can argue that Michael J. Fox doesn’t exactly look cool while yelling at the fruit dispensing robot in his VR glasses, but they are certainly a lot less obtrusive than some options that are currently on the market.

I guess what I’m saying is that maybe we should take a page from the Back to the Future II design playbook. Let’s embrace the fact that VR headsets will never look like regular glasses and goggles and run with it so that we can move past the era of weird looking VR headsets and instead focus our efforts on making flying cars happen.