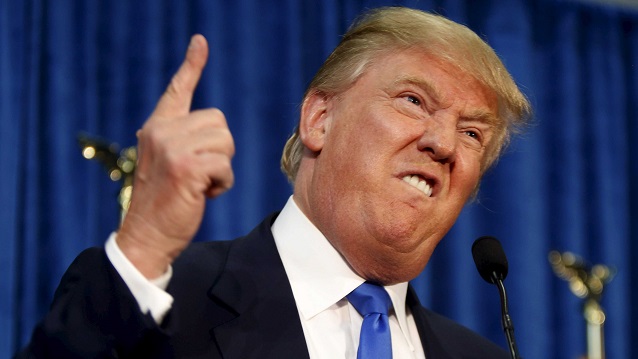 We truly live in some amazing times where people all around the world can get to enjoy the ultimate form of freedom of speech – the Internet. However, it seems like not everyone sees this as a good thing. Judging by the latest (of many, many) inappropriate statements made by the lovable Donald Trump, it might be best if the good ol’ U.S. of A. were to “close up” the Internet a bit. Trump also suggested that Americans should “go see Bill Gates” about this and together maybe find a way to “close up that Internet in some way.” I really wish this article was some kind of onion-style satire, but I keed you not, that’s exactly what the man said. Check it out below.

#DonaldTrump advocates closing up the Internet 2 stop the process of thought/free speech. So Communist China-like. pic.twitter.com/hRab3xpVcK

The reason why Donald Trump is so upset about all this internet freedom is because of ISIS and how the terrorist group uses various social media platforms to recruit new people for their cause. Granted, this is a serious issue that should definitely be addressed accordingly by the qualified people who are in charge of said platforms. To the best of my knowledge, though, Donald Trump is less than knowledgeable when it comes to any and all matters related to the Internet. For starters, the presidential candidate seems to genuinely believe that “closing up the Internet” – whatever that means – is no biggie in a country that’s already brimming with civil unrest. Secondly, it’s downright hilarious that the businessman thinks he can enlist the help of Bill Gates to help him with this ridiculous scheme. For some reason he also seems to think that Bill Gates might be in charge of the Internet or that he invented it.

What’s truly worrying is that the crowd was applauding while Donald Trump was giving his little speech. I mean, the man not only suggests that the US should restrict access to the Internet, but also calls those who might oppose the idea “foolish people” and yet the crowd is cheering. His exact words were “Somebody will say, ‘Oh, freedom of speech, freedom of speech.’ These are foolish people, we have a lot of foolish people.” Good thing he’s here to enlighten us, eh?

For the Trump’s full statements check out the source of this article on The Daily Dot.