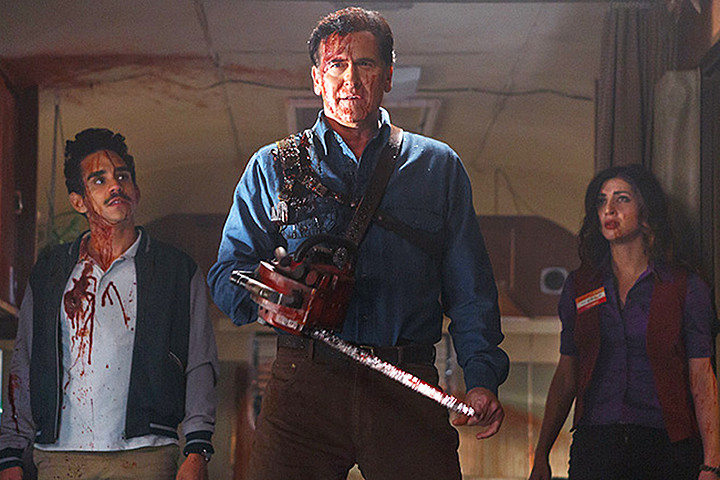 I’m what you’d call an “Evil Dead” superfan. I’ve watched the various incarnations of this marvelous cult series on numerous occasions. Bill Warren’s “Evil Dead Companion,” about the making of the film, has a special place on my bookshelf. On several occasions, I flew across the country or across town to meet Bruce Campbell at horror conventions and screenings. One of my prized possessions is an autographed “Evil Dead” poster, which ironically bears no likeness of the chainsaw-wielding, oft-put-upon antihero whose signature graces it.

Of course, as enamored with the brainchildren of Messrs. Raimi and Campbell as I am, I’m not a fool. We’ve been waiting a long time for “Ash Vs Evil Dead” to rear its mutated, white-eyed head. Too often fans have been disappointed with the end results of filthy lucre grabs or the results of jaded old filmmakers revisiting their launch pads—we’ve all seen the damage done to the “Star Wars,” “Godzilla,” and “Texas Chainsaw” franchises. Nonetheless, I admit that my heart began to pound after hearing that the Ash vs Evil Dead series would actually continue.

So, what are we in for this time? According to the description, the  Ash vs Evil Dead series will be a return to the generally mundane life of Ash Williams (Bruce Campbell—duh). After spending the last thirty years shirking adulthood and his demon-fighting past, it seems he’s suffering from a bit of survivor’s guilt. When those frisky Candarian Demons return to raise more hell, he reluctantly pulls out the old Olds (which is especially amusing since Oldsmobile, as a brand, is now undead), the boomstick, and that good ole chained appendage.

This time, though, he’s not alone. Ash is joined along the way by an idealistic and encouraging young immigrant Pablo Simon Bolivar (played by Ray Santiago) and a sweet young woman who’s been warped by her dealings with the Deadites, Kelly Maxwell (Dana DeLorenzo). More exciting still, Lucy Lawless returns to Raimi-TV as the enigmatic anti-Deadite quester, Ruby. She’ll be joined by an ex-cop hunter in her employ—sort of—as well as a few other familiar (Mimi Rogers) and fresh faces who pop in and out of the series.

Still, a few concerns linger: Will a middle-aged Ash provide the same borderline sadistic splatstick fun as his twentysomething counterpart? According to a recent interview with Sam Raimi, the Ash vs Evil Deadseries will retain the basics, even if Mr. Campbell has passed the spring chicken phase. Additionally, original film writers Sam and Ivan Raimi have returned and along with Tom Spezialy, will be penning most of the episodes, with input from Campbell. And yes, the concept of a wisecracker and his partners cruising the country in an old car and killing monsters does sound reminiscent of another popular TV show. But said paranormal show, and many others since “Evil Dead’s” inception, owe a debt to Ash and his demon-slaying series.

Since each of the 10 episodes of Ash vs Evil Dead season one will be packed into 30 minute blocks, the action will be relentless, the characters will be able to develop, and the demon heads will stack up rapidly—as we’ve come to expect from Raimi and company. It may not be Shakespeare, but Ash Vs Evil Dead is almost guaranteed to be a fun, snarky romp through a Deadite-infested protohell. And, despite all the inherent nostalgia and zombie-chopping madness, it will be interesting to see Ash finally have to grow up and face his demons.