HTC One M9 vs Galaxy S6: display and its impact on battery life 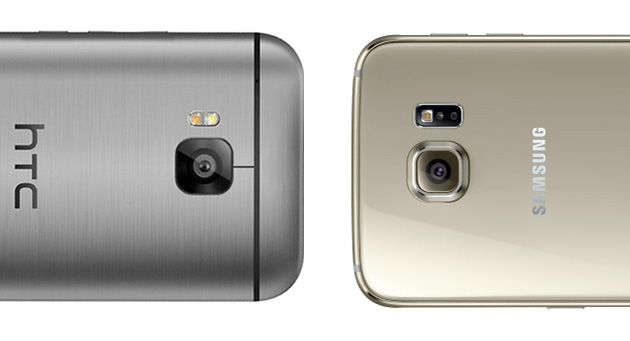 HTC One M9 vs Galaxy S6: display and its impact on battery life

The HTC One M9 and the Galaxy S6 from Samsung were launched earlier this month at the Mobile World Congress in Barcelona, and both came to be rather well-received by fans and critics. The HTC One M9 was not the star of the show, because the Taiwanese company behind it didn’t do the “design overhaul” that Samsung did with their new flagship and its counterpart, the Galaxy S6 Edge. Even if the HTC One M9 isn’t a completely new device, HTC has done a lot of upgrading to it when it comes to hardware and features, so it’s definitely going to be a good, future-proof smartphone to buy. All the while HTC struggles with revenue and has recently appointed Cher Wang as CEO of the company. Samsung hasn’t been doing well either, with the Galaxy S5 falling flat because of recycled design that has become rather annoying to fans across the world.

This time around, we’re going to be comparing the displays of the HTC One M9 and Galaxy S6 to see which is the better unit and which comes with the most advantages in user experience. The new fad when it comes to smartphone displays is QHD resolution, which is perfectly done on the Galaxy S6. Before getting into all that, we should review the hardware specs of each phone so that we can get a good idea of what is going to be consuming resources and what is going to help keep these phones as future-proof as possible. Since we started with the HTC One M9, let’s see what the new flagship has to offer to consumers.

First off, the HTC One M9 gets the same display as last year, probably with a bit improved technology embedded within. It measures 5 inches and it gets an FHD resolution of 1080-1920 and a pixel density of 441 pixels per inch. Although that seems like a resolution fit for last year’s flagship, HTC definitely knows what it’s going after: battery life. Smartphone users in the past few years have been very vocal about bad battery life on their phones, a claim which is valid for all the smartphones on the market. None of them can go past the 2 day mark, which is sad seeing as technology has advanced so much. For some reason, battery technology still hasn’t reached a point when users can say that they are truly satisfied with the battery life they’re getting with moderate use. The FHD display, although inferior to QHD, offers a good boost to that in my opinion.

The 441 ppi pixel density is more than enough for a 5 inch display, as the human eye doesn’t really see the difference between that resolution and a QHD one, unless the two panels are put side by side. Any ppi above 350 will seem just as bright and vibrant as the next one and won’t leave the user with the impression of an inferior display, which is why I’m definitely a fan of this kind of resolution over QHD. While the HTC One M9 keeps the display of its predecessor, the  One M8, that’s the only thing besides design and front-facing BoomSound speakers that the two have in common. Hardware-wise, HTC has done a great job at making the HTC One M9 as modern as possible.

Qualcomm’s Snapdragon 810 CPU is within the HTC One M9, and it’s an octa core 64 bit CPU backed by an Adreno 430 GPU and 3 GB RAM. Although many were expecting 4 GB RAM in the flagship, that doesn’t seem to be something HTC had thought about before releasing the phone. One of the most appreciated traits of the HTC One M9 is the fact that it still has a microSD card slot, which is missing from the Galaxy S6. It also gets 32 GB internal storage, which is enough for the average user, but that slot will definitely come in handy and will be a winner with many fans. The camera setup of the device has also been upped compared to its predecessor. The HTC One M9 camera on the rear measures a good 20.7 MP and gets autofocus and a dual-tone Flash, although it’s missing optical image stabilization. The front camera is a pretty great 4 MP Ultrapixel sensor, the same one found on the rear of the HTC One M8. Finally, the gadget gets a pretty beefy non-removable 2840 mAh battery pack.

The Galaxy S6 couldn’t be more different to be honest. On the front, we’ve got a 5.1 inch QHD panel with a 2560*1440 resolution that adds up to a huge 577 ppi pixel density. When you put it next to the HTC One M9, it certainly seems a lot brighter and crisper, but those pixels use up a lot of energy, that’s for sure. According to Samsung, the Exynos 7420 octa core CPU embedded within the phone will do a good job with battery and power management, but we’ll have to see when the phone is released. As I’ve mentioned before, there’s no microSD card slot, but you can opt for 32, 64 and 128 GB internal storage with the Galaxy S6, and it’s considerably faster than the HTC One M9 in read-write.  The camera on the Galaxy S6 isn’t as spectacular, as it gets a 16 MP sensor on the rear, but it’s complete with optical image stabilization and a 5 MP front camera, so it’s definitely admirable. From our tests, we can definitely say the camera is top-notch. The whole package is completed by a rather small, 2550 mAh battery, which is non-removable. It does get wireless charging and fast charging, but that doesn’t make it more appealing to many users out there.

Moving on to comparing the HTC One M9 display with that of the Galaxy S6, the first thing we have to say is that the latter definitely looks better from afar and up close. But that doesn’t mean it doesn’t influence performance and battery life and that it would be worth its money. Regardless, the Galaxy S6 display is truly the best smartphone display on the market right now, so it’s definitely prize-worthy, so to speak. It’s bright, crisp, sharp and you can get great viewing angles out of the Super AMOLED panel even outdoors, although maybe not in bright sunlight. The colors aren’t washed out, but if you go full-brightness, they will be. At least that’s what we’ve noticed with test and review units sent out to the press. The final versions of the handset shouldn’t present with these issues, but it’s not out of the question that they will.

The Galaxy S6 display brings forth highly vivid colors and you can actually change color saturation, which might come in handy. Videos look definitely premium on the phone, but aside from 4K playback, the resolution has no actual, real-life advantages. The display is really advanced, but the truth is, right now, there’s not much that can take advantage of it. You don’t really have that many high-res games or videos available on Youtube, but movie viewing will definitely be a blast, if you can settle for a 5.1 inch display for 2 hours. Otherwise, the Galaxy S6 could have been just as spectacular with an FHD screen.

The HTC One M9, on the other hand, looks just as crispy and sharp when it’s not next to the Galaxy S6. Its FHD resolution is sufficient for good quality viewing experiences and the upgraded panel manages to reproduce colors correctly and give you a good viewing experience even in bright sunlight. The colors are rich, but the HTC One M9 does seem to have a bit of trouble with blacks, which are not exactly black on the review units we’ve seen. Now we hope that changes once the smartphone gets officially released in stores, but we’re not counting on it. There’s definitely room for improvement in some people’s minds, but there are no complaints from us, that’s for sure. The 1080p display of the HTC One M9 is just as good as any other smartphone display out there and it demonstrates that you do not need QHD in order to have a good experience with it.

Coming down to battery life, it should already be clear to many smartphone enthusiasts which phone takes the trophy. The Galaxy S6 conks out at about 13 hours of moderate use, which is in no way above average. Even though it’s a bit better than the Galaxy S5 and its predecessors, it’s really not anything to write home about. With heavy use, the Galaxy S6 battery won’t last you a day, which is rather sad seeing as we’re truly impressed by the performance of the device. You do have wireless charging with both standards and super-fast charging, but that just means you’re going to have to carry around accessories. You can also take advantage of power saving modes to prolong Galaxy S6 battery life a few hours, but that’s not the point of engineering a smartphone.

The HTC One M9 lasted 13 hours with very heavy use, involving gaming, 4k video shooting, photography and a lot of online-time, which is absolutely great. With a light or moderate user, the HTC One M9 will hit the two day mark for sure. In days with light usage, the HTC One M9 managed power very well at 30 % brightness and we managed to pull through until the morning of the third day, with no problems. That’s hands-down one of the best battery life experiences on a smartphone, even surpassing the Galaxy Note 4 and Sony Xperia Z3. The HTC One M9 is definitely a winner, and that couldn’t have been achieved if the FHD panel was replaced with a QHD one. Now it’s up to you guys to weigh the advantages and disadvantages and decide which you like best. So?