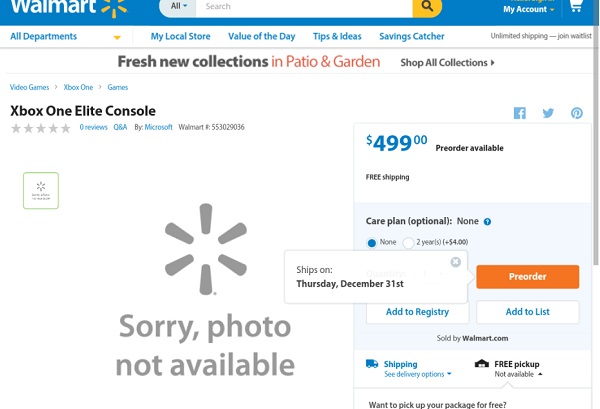 A listing for “Xbox One Elite Console” appeared on Walmart’s website earlier today, before swiftly being taken down. OXCGN took a screen-cap of the page before it disappeared. The image shows a listing for an Xbox One Elite Console, but no image. The price is listed as $499 USD, $150 more than the standard Xbox One console, and says it will be ready to ship on December 31st.

So is the Xbox One Elite Console a brand new edition of the Xbox One? Well, Microsoft did promise that it had more things to announce after its E3 presentation last week, saying it was too much to fit into a single press conference. So maybe they’re planning to announce the new edition at Gamescom.

Speaking of E3, Microsoft did use its press conference to announce the Xbox One Elite Controller. It’s a snazzy-looking device with fully removable, interchangeable buttons as well as four extra back triggers. It’s also bloody expensive at $150. Of course, $500 is a lot for a console that isn’t even new, so hopefully that price includes one of these fancy new controllers. Assuming the console exists, that is.

Hopefully the console itself will bring something new to the table. A larger hard drive would be nice, for starters. Of course, it could just be a standard Xbox One console with an Elite Controller stuck on, which would be rather disappointing. In fact, that’s what seems most likely. The standard Xbox One console is $350. Adding $150 for the controller to that brings it to $500… well, that’s a shame.

Okay, so it looks like it’s just a way of marketing the new controller to get people to pick up the console. It’s usually around this time in a console’s lifecycle that it gets a slim version released. That doesn’t seem likely for the Xbox One any time soon, so consider this “elite” version the new slim.

Mlais M7 review – Bang for the buck incarnate
The 3DSimo Mini is a cool 3D pen that also allows you to cut, burn, and solder objects