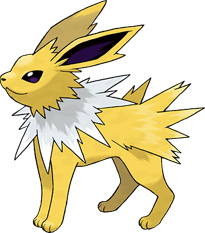 Revenge knockouts are a part of every single Pokémon battle ever had. When your Pokémon get’s KO’d you have to select your next Pokémon for the start of the turn. Pretty obvious I know, but this is why it’s important that you have a go to Pokémon that you can rely on to KO your opponent and make them wish they hadn’t got that knockout.

The Revenge Killer is that Pokémon. It needs to be faster than most Pokémon in order to hit first, and it needs to hit hard. It doesn’t need to be as hard a hitter as your sweeper (which can also work as a revenge killer), however it does need to be an offensive threat. It should also be able to clean up at the end of the game, being able to pick off any of your opponents team that have been weakened but otherwise haven’t gone down.

The revenge killer that has been a staple of the majority of my teams is Jolteon for its blistering, near unmatched speed and its phenomenal power. Jolteon is able to work with virtually any team, especially as it’s able to walk into any electric attack and just enjoy a hit point recover from them. With electric only being resisted by Electric, Grass and Dragon and have no effect against ground types it’s usually able to make its mark on most Pokémon.

Another good option is Scizor with its ability technician boosting up bullet punch (which always hits first) coming off a strong special attack. Scizor is particularly useful now more than ever because of its strength over fairy types. Flygon makes for an underrated revenge killer however Azumarill is just an absolute beast.

Azumarill just plan doesn’t care who you think you are, or what you think you’re entitled to. With huge power and aqua jet, Azumarill is able to hit hard and hit fast each time, and with its amazing ability and great typing of water and fairy it’s able to stick around and more than hold its own as a sweeper if needed to, not unlike the way Scizor can hang around.

I’d personally recommend a Pokémon that gets a lot of positive type coverage, unusually I would actually recommend normal as a type for some revenge killers as there is very little that actually resists normal, despite it not being super effective against anything.

What Pokémon you use as a revenge killer can also rely heavily on what weather conditions you use in a battle too. I’ll talk more about the weather next time.