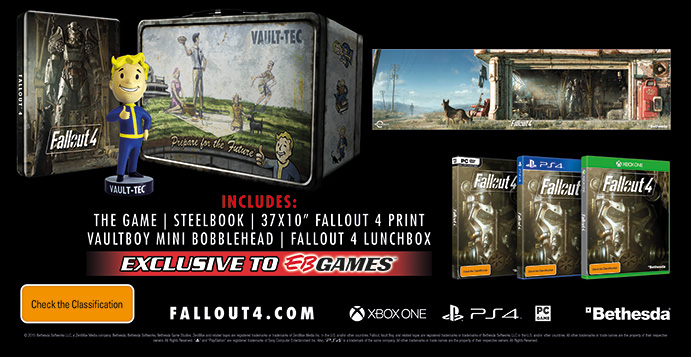 Fallout 4 is one of the biggest and more anticipated new releases coming later this year in all regions on consoles and PC and it’s not surprising to see that the game will be released in several different bundles all over the world. Some of these bundles are especially interesting, as they will include extra goodies that cannot be obtained in any other way.

One of these interesting bundles has been revealed a few hours ago. The Fallout 4 Nuke Pack will include a copy of the game, a steelbook, a 37 x 10″ Fallout 4 print, a Vaultboy Mini Bobblehead and a Fallout 4 lunchbox. This special edition of the game has only been confirmed for Australia as an EB Games exclusive and we don’t know if it will be offered anywhere else. You can check out the content of the Nuke Pack right below. 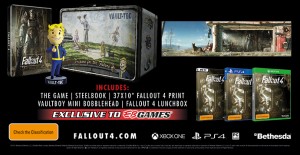 Earlier this week another special Fallout 4 bundle has been detailed. The Fallout 4 Mighty Bundle, which will be exclusive to the New Zealand retailer Mighty Ape, will include a copy of the game, the Fallout 4 franchise book which details the history of the franchise and also includes high quality images and a Fallout Vault Boy Pop! Vinil Figure. Just like for the Nuclear Pack bundle, we have no idea if this bundle will be made available outside New Zealand.

More news on the game will be coming very soon. Bethesda confirmed last week that a new Fallout 4 presentation will be shown during this year’s Gamescom, which will be held in early August in Cologne, Germany. More details on this presentation will be made available soon.