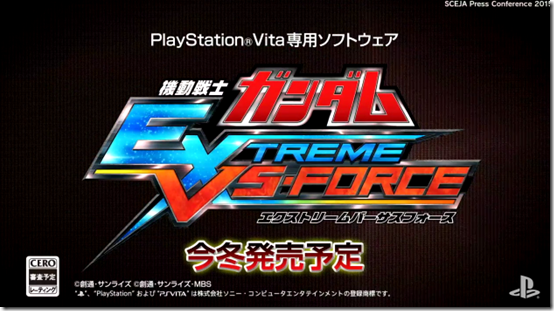 Last week several new PlayStation consoles exclusive titles have been revealed during Sony pre-Tokyo Game Show 2015 conference. Among them was Gundam Extreme VS Force, the new entry of the Bandai Namco series based on the popular Gundam series. The game was also available in playable form last week and several gameplay videos have surfaced online in the past few days. Another one of these gameplay videos has surfaced online the past few hours.

The new Gundam Extreme VS Force gameplay video showcases some quick gameplay sequences taken from the playable Tokyo Game Show 2015 demo. The video is an off-screen video so quality is not the best. Still, it’s pretty easy to understand what’s going on in it so make sure to check it out if you’re a fan of Gundam and of the series published by Bandai Namco.

Gundam Extreme VS Force hasn’t been confirmed for the West but English speaking players will still be able to enjoy the game next year. Last week the PlayStation Asia Twitter profile confirmed that the game will receive an Asian English version. This doesn’t mean that the game will be officially released in North America and Europe but it’s still good to know that an English version of the game is going to be made available.

As mentioned above, Gundam Extreme VS Force has been revealed during Sony’s Pre-TGS2015 conference. The new entry of the Gundam VS series will sport some of the best features of past entries,  two on two battles, mission challenges, new play modes and much more.

Gundam Extreme VS Force will be released this Winter in Japan exclusively on PlayStation Vita. The game’s English Asian version has been confirmed and it will be released on a yet to be confirmed release date. We will keep you updated on the English version of the Bandai Namco game as well as on its possible official Western release as soon as possible so stay tuned for all the latest news.