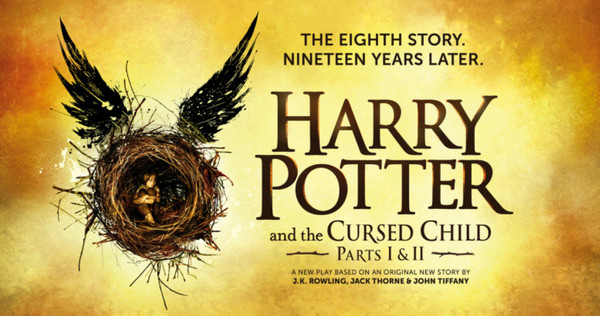 Yesterday just appeared the official poster of J.K. Rowling’s upcoming play “Harry Potter and the Cursed Child”. The play is set to take place next summer at the Palace Theater in London’s West End. The play was officially announced last summer, and J.K. Rowling confirmed that the play will not be a prequel, it will actually be the next part of the Harry Potter franchise. On the author’s website, Pottermore, J.K Rowling revealed new information about the play and the fact that this will be the eighth part and the first one to be presented on stage.

“It was always difficult being Harry Potter and it isn’t much easier now that he is an overworked employee of the Ministry of Magic, a husband and father of three school-age children. While Harry grapples with a past that refuses to stay where it belongs, his youngest son Albus must struggle with the weight of a family legacy he never wanted. As past and present fuse ominously, both father and son learn the uncomfortable truth: sometimes, darkness comes from unexpected places.”

The last part of the Harry Potter franchise, ended with Harry Potter (Daniel Radcliffe) and Ginny Weasel (Bonnie Wright) taking their children James Sirius Potter and Albus Severus Potter to the train station for their first year at Hogwarts School of Witchcraft and Wizardry. It is said that the play will feature over 30 characters . However, the cast will be announced at a later date. This is what the author, J.K. Rowling,  the writer, Jack Thorne and the director John Tiffany had to say about the upcoming play Harry Potter and the Cursed Child:

“It is very exciting to explore Harry’s world in a brand new way through the live form of theater. Collaborating on this story is exhilarating for all of us and we can’t wait to present the eighth story at the Palace Theater next summer.”

“The story only exists because the right group of people came together with a brilliant idea about how to present Harry Potter on stage. I’m confident that when audiences see Harry Potter and the Cursed Child they will understand why we chose to tell this story in this way.”

The news of the Harry Potter and the Cursed Child play made me so excited that I would hop on a plane right now to thank J.K Rowling for this massive thing. If there is a play though, maybe there will be a book, even a movie. What do you think guys? Are you happy that the Harry Potter franchise is not over yet?