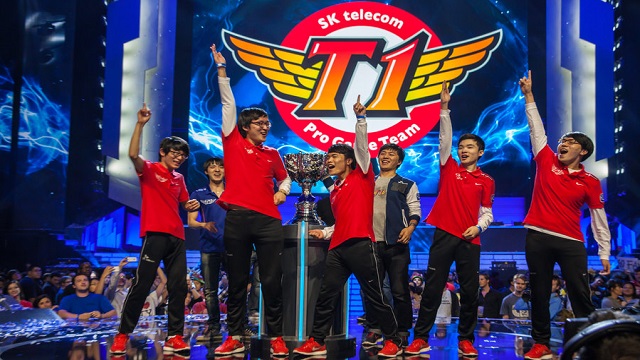 This year we had a wild Worlds with so many ups and downs from the start and a wicked pools round. One team showed nothing but utter domination over their opponents so it comes to no surprise that the team who was the most consistently good this Worlds would take it all home and that team’s name is SKT1. SK Telecom T1 brutalized their opponents. They may have let some individual games get a little out of hand, but the difference when talking about SKT1 is how a game could look grim, but they come back and make it look routine. SKT1 being one of the only teams that uses a sub rotation, it works so well because Easyhoon is an exceptional player in his own right, adding some wins under his belt during this Worlds as well.

SKT1 in the quarters went up against AHQ. This was a very fast series with Bang outplaying An, and Albis showing up as the no questions asked best ADC of Worlds. Moving onto the semi-finals SKT1 was set to face off against underdog, and dark-horse Origen. This is where we got to see the difference in class with Marin and Bengi simply out classing SOAZ and Amazing in the series. SKT1 at this point had not dropped a game and this series was no different with 3-0 against Origen.

The finals was an all Korean battle where SKT1 would face off against KOO Tigers. This was probably the most SKT1 would be pushed this entire tournament, but that’s not saying much considering that the score of the series was 3-1. There’s a saying that goes “Play like you have been there” This is something, however, that Koo could not implement into their game. Even when they had a lead they just did not know how to push that advantage on a team of SKT1’s caliber, later letting the game slip from them. KOO’s only win came when they found themselves ahead on super snowball champions like Hojins Lee sin, Kuros kassadin, and Prays Ashe.

This victory would go on to be very short-lived for Koo unfortunately, but to KOO’s credit they were the first, and only team to hand SKT1 a loss the entire tournament, a feat many thought was near impossible. Many people would go towards picking easy choices for MVP of the series such as Bang or Faker, but I think Marin played lights out against Smeb, making it look like Marin was playing by himself in the top lane. Even in the loss Marin had decent states on his Rumble, but Marin was a huge rock and Hojin could not break the top lane, which opened things up for Bang on the other side of the map. It’s pointless to discuss because you can make the argument for any one the players to take MVP they were just so peerless on the Worlds stage taking home their second Summoners Cup. One can hope they’ll stay together and go on to repeat a feat that has not been accomplished in League of Legends history.

I have been following Esports from late doom and early counterstrike. I follow League, Hearthstone, CSGO, Smite, and most games in the FGC.