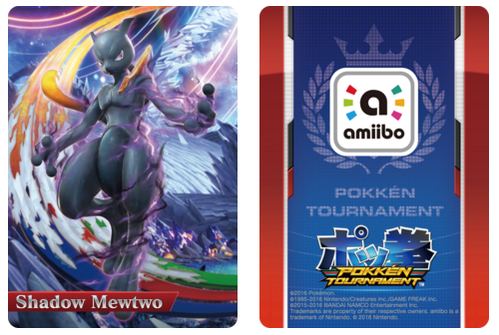 Pokken Tournament, the unique game developed by Bandai Namco featuring several popular Pokemon, is one of the more anticipated games releasing next year on Wii U. The home console version of the game is going to be compatible with amiibo figures, like all the more recent Wii U games and a new amiibo card based on one of the characters included in the game is also going to be released.

Earlier today Pokken Tournament has been made available for pre-order on Best Buy. All first print run copies of the game will include the Shadow Mewtwo amiibo card, which can be used to unlock the character in the game immediately. The game can currently be pre-ordered for the price of $59.99.

A new Pokken Tournament commercial has been made available last month. The commercial showcases the arcade version of the game which has been released a few months ago in Japan. The video is available only in Japanese as of now but it’s pretty easy to understand what’s going on in it even without understanding the language.

Following the announcement of the Wii U version, we haven’t heard  much about the Western release of Pokken Tournament. A few months ago a new Pokken Tournament image has been shared back then, showing the English names of some of the Pokemon special moves. As the Western release of the game is still in development, it wouldn’t be surprising for some of these moves to receive different names in the final release.

Pokken Tournament is now available in Japanese arcades and it will be released during Spring 2016 in all regions exclusively on Wii U. We will let you know more about the game as soon as more comes in on it so stay tuned for all the latest news on the new Bandai Namco developed fighting game starring the popular Pokemon.