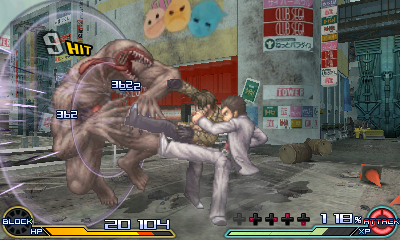 Project X Zone 2, the new role playing game featuring characters taken from Bandai Namco, Capcom, SEGA and Nintendo series developed by Monolith Soft, has been released in Japan last week but North American and European fans of the game still have to wait a few months before being able to play it. However it seems like Western fans of the game will be rewarded for their patience, as some exclusive content will be offered to them as pre-order DLC.

Earlier today Bandai Namco has confirmed that all those who will pre-order Project X Zone 2 in North America will receive an exclusive pre-order DLC which will include a Challenge stage called The Woman From 10 years ago, an exclusive 3DS Home Menu Theme, the Sun Sword, the Diamond Metal and Amethyst Medal accessories.

Last week Japanese magazine Famitsu included in its previous issue a code for an exclusive Project X Zone 2 DLC pack. This DLC pack included some special equipment that should make players’ lives easier in the game.

Project X Zone 2 has also received a limited edition in Japan including a variety of extra goodies. Among the extras included in this special edition of the game is an interesting bonus game, a new version of the Bandai Namco title Valkyrie no Bōken: Toki no Kagi Densetsu – The Adventure of Valkyrie: The Legend of the Time Key featuring Xiamou as playable character. A video showcasing the bonus game has been made available online a few days ago.

Project X Zone 2 will be released in two days, on November 12th in Japan exclusively on Nintendo 3DS. The North American and European releases will come during early 2016. We will let you know more about the game’s Western release date as soon as possible so stay tuned for all the latest news on the next role playing game developed by Monolith Soft.