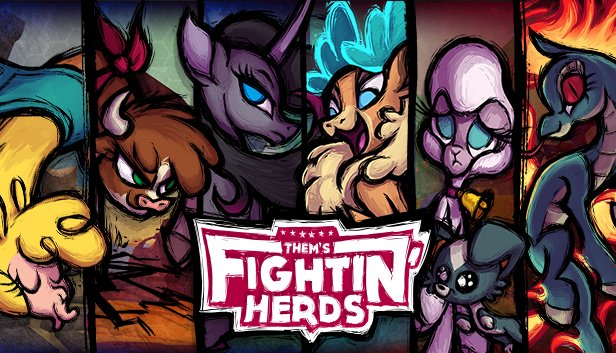 Aw, yes! This is the news I have been looking forward to report for quite some time now.The Fighting Game Community will soon be blessed by Them’s Fightin Herds. A game that has had a rough history (Much like Skullgirls) but made it through the fire and flames.

The Former brony fangame (A.K.A. Fighting is Magic) will now be making a return as a standalone title published by Humble Bundle. This announcement came with a trailer that showed just how much effort the development team put into making this game.

The game will feature stuff we’ve seen in other fighting games such as Story, Training and Online modes. However, there is some other modes that stick out from other fighters such as the capability of training Online and Target Practice.

The main attraction is going to be dynamic music while fighting. Basically, the background music will change according to who has the bigger advantage. It’s an innovative system that definitely could go a long way.

Of course, the visual aspect of the game cannot go unattended, either. The animations look so fluid, vibrant and full of life! It’s definitely great to see Lauren Faust’s work being used for something that deviates from TV Shows.

The game also comes with a few gifts thanks to a partnership with Lab Zero Games and Arc System Works. If you get Them’s Fightin Herds and own Skullgirls, Guilty Gear Xrd Rev. 2 and BlazBlue CentralFiction you’ll get exclusive lobby avatars.

This game is definitely going to be one that the Fighting Game Community will love. I just can’t wait for them to give this game its spot in EVO much like how Fighting is Magic was going to take. Without pesky C&D letters to get in the way of the fun, no less!

I will be talking more about Them’s FIghtin Herds as I go along. But let it be said that I think this is a product worth purchasing once it comes out in February 22. Now, where are the EVO Side-tournament polls? I think we already know which game is going to win it.