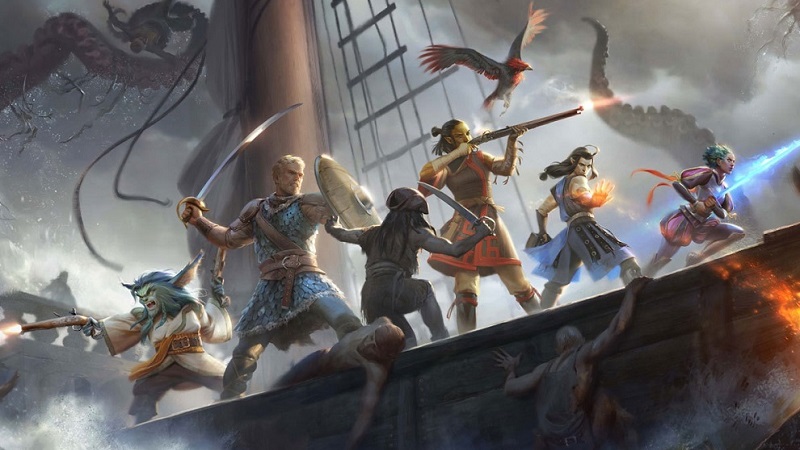 The release of Pillars of Eternity 2: Deadfire is on the horizon, and now the Entertainment Software Rating Board (ESRB) has released their official rating for the game. They gave the game a Mature rating, due to content including Blood and Gore, Nudity, Sexual Themes, Strong Language and Violence.

The following is the complete rating summary for Pillars of Eternity 2: Deadfire:

“This is a role-playing game in which players control a party of characters as they complete quests around a fantastical island region. From a top-down perspective, players interact with townspeople and engage in real-time battles with humans and creatures (e.g., boars, skeletons, elementals). Characters use swords and magic attacks to defeat enemies in brief, frenetic combat; battles include large splashes of blood, and sometimes, chunks of flesh. A handful of game environments depict severed limbs and torsos littering the ground.

During the course of the game, players can hire courtesans after selecting flirtatious dialogue choices (e.g., “I wouldn’t mind seeing you again…so long as you come with coin.”); other text and conversations include suggestive/sexual references (e.g., “[He] accused a man of…indiscretions with his own sister”; “The two of you tumble into your bunk, and you pass a few sweaty hours in one another’s company”; “[He] called someone a sister-f**ker.”). A bath-house sequence briefly depicts nude characters with bare breasts, as well as male genitalia.”

Pillars of Eternity 2: Deadfire does not yet have a release date, though it is expected to launch at some point this year. The game is in development for PlayStation 4, Xbox One, Nintendo Switch and PC.