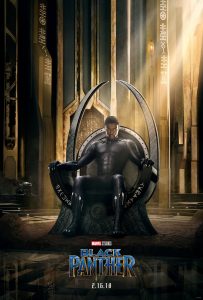 There’s really not much to say about the poster besides that fans online aren’t very pleased with it, saying it looks very poorly photoshopped. The trailer is a different story, however and there are plenty of details to go through.

The trailer opens up with a shot of Andy Serkis’ character, Ulysses Klaue chained to a chair. Fans will no doubt recognize him from his brief appearance in 2015’s Avengers: Age of Ultron. He is also missing his left arm, which he lost when he angered the titular Ultron by comparing him to Iron Man in the same film. Andy Serkis is well known for his roles as motion capture characters, like The Lord of the Rings’ Gollum and the new Planet of the Apes’ Caesar.

He is being interrogated by Martin Freeman’s character, Everett Ross, who fans will also remember from last year’s Captain America: Civil War. Being questioned about Wakanda, Black Panther’s fictional homeland, Klaue reveals he’s been there and back and that it is a hidden nation in Africa that was once falsely known by outsiders as El Dorado. Ross reveals that the country is known as a third-world nation to the rest of the world, but Klaue reveals it is a technological wonder of a land.

The trailer continues with a group of what appears to be soldiers or mercenaries being attacked by the Black Panther, presumably looking for Wakanda. The scene moves to Klaue laughing like a madman and a line revealing he can see Chadwick Boseman’s T’Challa and Danai Gurira’s Okoye watching from behind the glass. T’Challa was introduced in Civil War along with Ross, however Okoye is an entirely new character played by an actress well-known for her role as Michonne on The Walking Dead.

We get our first real glimpse of Wakanda after the Marvel Studios logo and it is very futuristic, although the shot of what I’m assuming is T’Challa’s ship flying through greatly adds to that vibe. There’s a brief shot of Forest Whitaker’s character who, as of right now, hasn’t been given a name. He has markings all over his face and has an other-worldly outfit making him look a lot like an extra for his last big film Rogue One: A Star Wars Story, where he played Saw Gerrera.

The very next shot is of a man wearing a mask that looks a lot like the Marvel Comics character W’Kabi, who is confirmed to be played by Daniel Kaluuya in this film. Moviegoers might recognize him as the lead character Chris Washington of earlier this year’s Get Out. That is followed by our first glimpse of Lupita Nyong’o’s character, Nakia walking through a casino wearing a dress. Moviegoers will also recognize her as Nakku Harriet from last year’s Queen of Katwe although her voice talent is probably more recognizable as Maz Kanata from Star Wars: The Force Awakens and as Raksha from last year’s The Jungle Book.

There’s a brief shot of Danai Gurira showing off her action skills, T’Challa approaching a group of warriors appearing to surrender, and Klaue wearing a disguise and pulling out a silenced pistol. There’s a flurry of shots as it goes on with T’Challa at the United Nations and Michael B. Jordan’s character, Erik Killmonger, being escorted in as a prisoner. Jordan is well known for playing Adonis Johnson, the lead of 2015’s Creed and as the most recent live-action interpretation of Jonny Storm from 2015’s Fantastic Four. Jordan is now the second actor to go from Human Torch to MCU character with Chris Evans becoming Captain America after his go at it.

There are a lot of further quick shots of action throughout with some highlights being Killmonger vs. T’Challa, Okoye getting surrounded, and Black Panther slamming an SUV with some futuristic gauntlets. The gauntlets lead to the money shot of the trailer where Black Panther slow-mo flips onto the car in front of him looking like the badass he is.

As can be noted in what I wrote, there are a lot of heavy hitter actors and actresses in this film. There is no doubt an entertaining story with well-acted characters and intriguing expansions of the MCU’s lore to come with this film.

“Batman and Harley Quinn” – A Speculative Pre-review from a Batman “Traditionalist”
Star Wars: How One Line About Family Changed the Series Forever