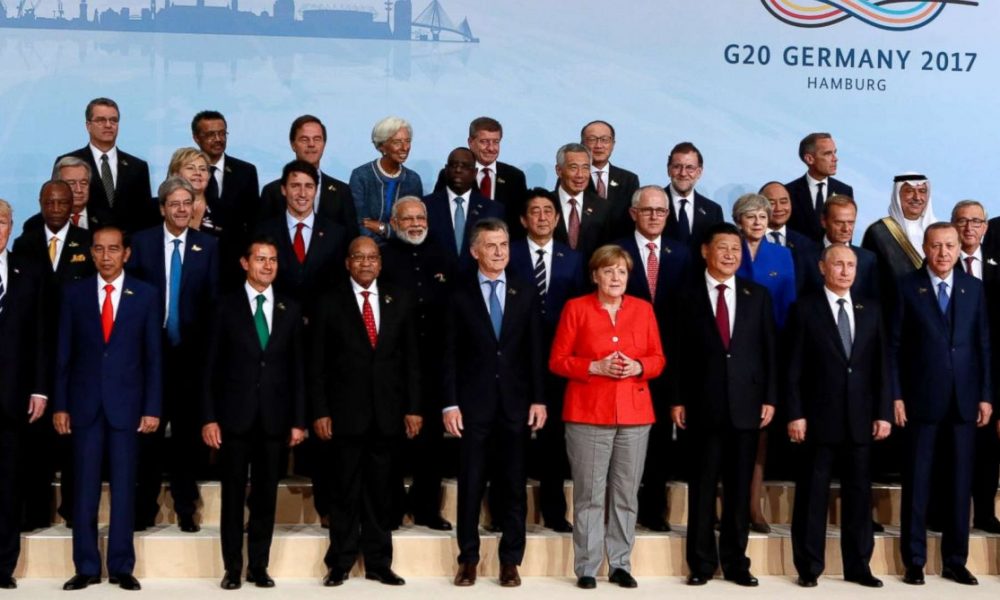 Following the G20 summit, member nations released a statement reaffirming commitment to reversing climate change with one exception, the USA. World leaders showed solidarity and a unilateral desire to both promote renewable, sustainable energy sources and to decrease greenhouse gases. Except for President Trump. 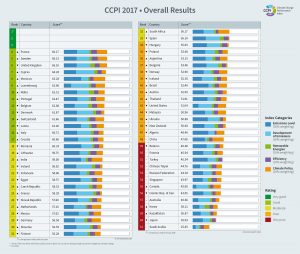 Country rankings in the 2017 CCPI published by Germanwatch.

Yes, yes there is a debate on climate, but it’s based on data…

Gary Cohn, the head of the National Economic Council, acted as a US representative at the G20 summit. In response to a question about the Trump administration’s stance on global climate policy, he replied “Look, there’s a debate on climate.”

He is, technically, correct. There is a debate on climate. In fact, there are two. The first debate, to which Mr. Cohn refers, is the one championed by the Trump administration, climate change deniers, and the Republican Party. Furthermore, they are having it among themselves, being the only participants.

The second debate is the real one. The subject is how to save the environment. People are trying to find the best solution to mitigate, if not reverse, detrimental climate change. Included is how best to manage resources for our descendants’ survival. There is active engagement about how to promote and create technology that harvests energy from renewable and sustainable resources. The debate includes the reality on how to continue economic growth and prosperity without mortgaging the future of our species on Earth.

Overcoming Obstacles – It’s What Humans Do

There is no reason to ignore technological advancements for clean and efficient uses of fossil fuels. Though some may offer debate, we still do require fossil fuels. However, just because we require it now, does not mean that we will in the future. If we participate in a concerted effort to change, then we can change. Humans are wonderful problem solvers. There are countless examples of how we have overcome apparent obstacles to achieve goals. For Asklepios’ sake, we can transplant organs and have made recent inroads to providing sight to the blind. We can survive in extreme temperatures and in space! Almost all of us carry around a supercomputer in our pocket, though we primarily use it to play games and watch movies, and we insist on calling it a phone.

Discovering advancements to exploit fossil fuels is a worthy endeavor, and we should pursue such technology. It’s just not the future of energy production. This is the clear statement from governments to businesses to individuals. The Trump administration’s stance on climate change and the refusal to participate in a unified global climate policy is an example of the administration’s lack of foresight and leadership on the world stage.

President of the USA, Not of the World

President Trump is absolutely correct when he states that he was voted to be the president of the United States, not of the world. The problem is that this is a shortsighted way of thinking. The countries of world are connected no matter how loud the deniers shout. We live in a global community. There is a plethora of companies operating on the global level to implement renewable, sustainable energy solutions. President Trump’s choice to ignore reality means that the United States will lag in the ability to exploit and profit from renewable energy technology. Dismissing the global community’s efforts at addressing climate issues and renewable energy means that the USA no longer has a reason for an invitation to the table for future conversations. The United States has lost credibility for even promoting solution options.

Just last week, the Australian state of South Australia and Tesla announced a partnership in sustainable energy. Tesla won a bid to install a 100MW (megawatt) Powerpack system for South Australia to be operational by December 2017. Tesla’s batteries will store energy created by the turbines of Neoen’s Hornsdale Wind Farm. Neoen is still building the three-stage project that will produce 315MW for South Australia’s public electrical grid. The completed project will produce energy for 180,000 homes. In January 2017, the company completed the first stage which produces around 100MW.

When the results begin to show, people will not look to the United States for guidance, rather to Australia or one of the many other countries (e.g. India) that are actively promoting positive energy solutions. Fortunately for the USA, there are states, cities, and territories that are pursuing renewable energy solutions despite the federal government’s dismissal of such solutions.

A Plethora of Examples (Jefe, what is a plethora?)

Tu’a, an island in American Samoa, and Tesla completed a 7-acre solar farm in November 2016. The solar cells generate 1.4MW of electricity that transfers to sixty Tesla Powerpacks for storage. This system can provide power to the whole island for three days without sunlight and recharge in about seven hours.

The island of Kauai and Tesla completed a two-part project in March 2017. First, Tesla installed 272 Powerpacks, storing 52MW of electricity, into Kauai’s existing solar grid. The second part was the construction of a 50-acre solar farm. The farm consists of solar panels producing 13MW of electricity.

The energy company Southern California Edison and Tesla completed a project in January 2017. The project saw the installation of 396 Powerpacks with an 80MW capacity. The purpose is to provide further stability to southern California’s electrical grid and reduce reliance on natural gas.

The options available for harnessing renewable energy are staggering. Our own Saul Bowden reported in April about the advancements in creating a road that captures solar power. There are water pipes with mini-turbines inside to capture energy during municipal water use. Wind trees are available, aesthetically pleasing, low maintenance, and able to produce around 2,400 kWh per year. We have transparent windows that can capture solar energy. Of course, we must not forget the old solar panel for homes, though now they are smaller, more efficient, and almost unbreakable.

Leadership Is Needed, There Need Not Be Only One

These are just a few examples of the myriad options for harnessing renewable and sustainable sources of energy. When all options are taken together, it proves that people want this kind of energy. And they want it because climate change is real and fossil fuels are a finite source. If President Trump and his administration continue to force antithetical solutions, then leadership will be found elsewhere. If the Trump administration’s decisions cost economic progress, then in a short time he will be on the receiving end of upset capitalists.

Now, the G20 countries will work toward ratifying laws in support of the agreements. There is still much that can change depending on each country’s own politics. Regardless, the unified commitment is the important part. If President Trump wants any say in global energy policy over the next four years, he should start taking into consideration opposing views. Otherwise, the United States will soon find itself at the back of the pack.