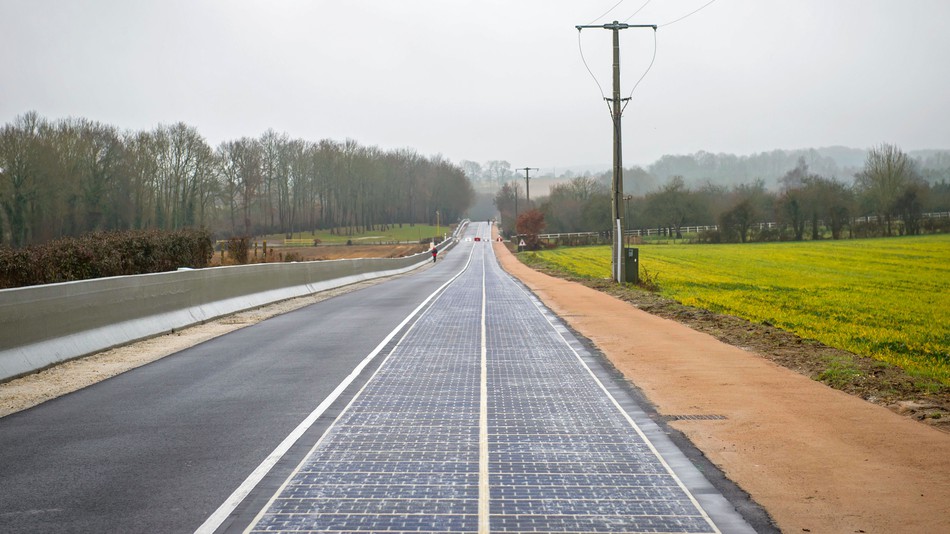 There is something you might not expect nestled within the small village of Tourouvre-au-Perche, in Normandy, France. They have just debuted the world’s first Solar Road. It is 1 Kilometer in length and contains photo-voltaic panels. It was developed over a five-year period by Colas. The solar road has been dubbed “wattway” and it will power all of the street lights in the village and expects to see around 2,000 motorists per day.

A solar Road consists of a number of rugged solar panels placed into a road surface. The panels themselves do not vastly differ from the Solar Panel you might see on a rooftop. To help protect these fragile panels from the weight of traffic they are encased by layers of many types of plastic to create a clear and durable case. The electrical wiring is then embedded into the road and an anti-slip surface of crushed glass is applied.

While the wattway in France is the world’s first solar road it is still small scale and will spend the next two years as a testing-bed for future projects. This is a point that has been picked up by Marc Jedliczka, the vice-president of Network for Energetic Transition who told Le Monde who has said that there are “other priorities than a gadget of which we are certain it’s very expensive”.

On top of the financial costs there are concerns that solar roads do not have the durability to justify the high up-front costs. For example, many governments struggle to maintain their asphalt road infrastructure and would likely be hard pressed to find the resources to maintain a complex solar road. This problem will only be exacerbated on a major road with heavy traffic.

Advocates will argue that as the cost of photo-voltaic panels decreases and the scarcity of available land increases solar roads will look increasingly attractive and commercially viable but until that happens the worlds first solar road may well end up being the worlds only solar road.

Samantha JacksMay 2, 2017
Read More
Ooho: The Biodegradable Water Bottle of the Future with the Weird Name
Could Brexit be about to trigger environmental decline?