French Elections: Why are they important and what do you need to know?

French Elections: Why are they important and what do you need to know?

France is about to enter the first round of their elections and it’s really close. Normally we’d maybe report the result and then we’d move on. This time it’s different. The upcoming French elections could determine the future of Europe and its relationship with the rest of the world.

Why is it important?

Right now, you may be asking yourself how the French elections could have any real impact on anywhere but France? Well, as with most problems in Europe now it comes down to Brexit, or more precisely, the very real possibility of the French following the British out of the door.

These French elections are widely being regarded as a bellwether for France’s relationship with the rest of the European Union. Two of the top candidates are die hard Eurosceptics. Should either of them win, there is the very real possibility that France might leave the EU, making the break up of the bloc all but certain.

How do they work?

The French presidential elections are fought in two rounds. There are currently eleven candidates vying for the presidency. They will all face off in the elections on the 23rd of April. If, as predicted, nobody secures an absolute majority then the top two candidates will face off on a second election on the 7th of May.

Who are the main contenders?

There are five main contenders who could go into the second round, we’ll list them from left to right. 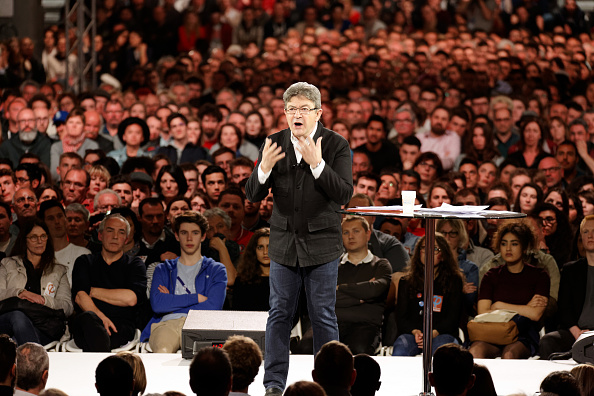 Jean-Luc Mélenchon is the most left leaning candidate with a shot at the presidency. He is Perhaps most famous for his holographic performances. Once a supporter of European Federalism he now argues that France should leave the European Union due to its inability to deliver democratic change.

In previous French elections his acerbic style put off potential voters, he only managed to win 11% in 2012. Now he has refined his approach, rather than insults he has focused upon making fun of his opponents and it works. Mélenchon has managed to connect with  voters and his new approach has won him many supporters, especially young supporters.

He wants to reform French democracy, taking power away from the President placing an emphasis upon the constituent assembly. He also wants to reduce the voting age to 16 and wipe out homelessness. Mélenchon’s foreign policy would involve withdrawal from NATO and the IMF and he would seek to join the Bolivarian Alliance for the Americas. Mr Mélenchon also wants to renegotiate the EU treaties to force the European Central Bank to answer to political rather than monetary interests.

Critics claim that Mélenchon’s doesn’t have a plan to pay for his proposals and that his ideas are unworkable in practice and risk damaging the economy. Despite those claims he has struck a chord with voters and is in with a shot at winning.

Despite a decisive victory in his party’s primary race, the “French Bernie Sanders” has struggled in the polling so far. This is in a large part due to competition from Mélenchon and the current President, François Hollande’s abysmal approval ratings.

Hamon looks the part and he has some pretty interesting and forward thinking proposals. These including legalizing cannabis, taxing the wealth robots create at the expense of jobs for humans, a proposal for basic income to provide a boost to low earners and a serious push towards using renewable energy.

Despite looking the part and having interesting policies, Hamon remains an outsider and it looks like he will struggle to make it into the second round. Only 39 years old, Marcon has a real shot at becoming the youngest president France has ever had. He is pegged as one of the two most likely candidates  to make it into the second round. This is especially surprising as the investment banker has never held elected office in the past.

Marcon’s En Marche movement is “neither right nor left” and he is by far the most centrist of all of the candidates. He was economic advisor to President Hollande before becoming the economy minister in 2014. His policies faced stiff opposition from the left leaning members of the governing socialist party but were very popular with French businesses.

Staunchly Pro EU Marcon’s policies focus around giving French business a boost. On top of massive corporation tax cuts he also wants a €50 bn public investment plan to cover job training, a shift to renewable energy and infrastructure improvements. He also wants to cut unemployment to 7% and ban under on under-15s using mobile phones in school

Marcon’s critics claim that his centrist policies won’t motivate voters if he makes it to the second round, which could risk handing the election to Marine Le Pen. when Francois won his centre-right party’s nomination for the presidency he was almost immediately pegged as the front-runner in what most people believed would be a straightforward race. That all changed when his campaign was embroiled in scandal. There are allegations that Fillon’s wife and his two children received public funds for doing little to no work. Despite the set-back Mr Fillon has refused to drop out of the race.

Fillon’s policies are primarily focused upon cutting expenditure and encouraging French patriotism. If elected he plans to scrap the wealth tax, remove half a million public sector jobs and require parents receiving state aid to sign contracts to stop their children engaging in behaviour “disrespectful of the values of the French republic.” Filon’s foreign policy is broadly pro-Russian and he wants EU sanctions against Russia lifted.

His campaign may have been rocked by scandal but he has made a recent comeback in the polls, so I wouldn’t count Fillon out yet. Marine Le Penn has become a favorite to win the first round, despite the FNs past – Credit The National Interest

Marine Le Pen is widely regarded as the most controversial of the candidates. When she took leadership from her father in 2011 she bought the widely reviled FN out of the fringes and into the mainstream. She came third in the presidential elections in 2012 and bought her party massive electoral gains in the 2015 regional elections.

Before Le Pen took the reigns from her father the FN was widely regarded as an extreme far-right party. Her father was dragged into court on multiple occasions for holocaust denial and Le Penne herself has made deeply questionable statements. In 2010 she compared Muslims praying in the streets to the Nazi occupation of France.

Le Pen’s stance has significantly softened since then and she has worked hard to present a more conciliatory tone and make FN appear like a party of governance. So far, it seems to have worked, her message of France First has really struck a chord with disaffected French youth and Le Pen seems likely to make it into the second. Even so most analysts think it unlikely that she will go on to become France’s first female president.

Le Pen’s policies are deeply nationalistic. She has even go so far as to call for a complete moratorium on legal immigration until a new system is put in place. Le Pen has also called for the automatic expulsion of all illegal immigrants and the closure of “extremists” mosques. Her economic policies would focus on making companies consider French citizens first for social housing and jobs as well as fixing the retirement age at Sixity.

Like Fillon, Le Pen’s policies are broadly pro-Russia and she would like to see an end to the sanctions imposed by the European Union. Le Pen would also seek a renegotiation of the EU treaties with a referendum on EU membership.

It remains to be seen whether Le Pen has truly manage to erase her party’s toxic reputation in order to win the election.

So who will win?

At this stage the election has become very difficult to call. Most analysts believed that Le Pen and Marcon would face off in the final round. Recent polls put it at a four ray race between Fillon, Le Pen, Mélenchon and Marcon. As with the American election and Brexit, the French elections are proving to be deeply unpredictable.  We may well end up seeing Mélenchon and Marcon face off or Le Pen and Filon, as originally predicated, it really is too close to call.

Whatever the result, the outcome will be a good indicator for the direction Europe is headed in and the implications will likely be felt for years to come.