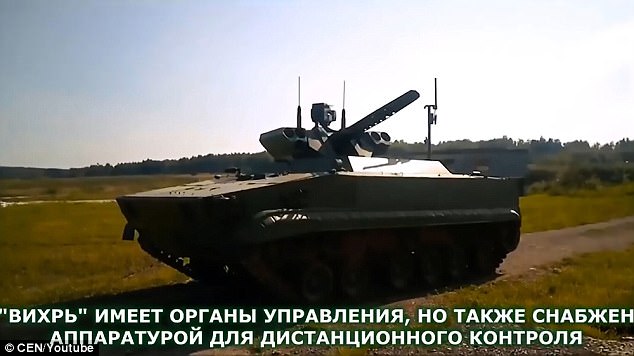 It seems only yesterday when Russia taught it’s cyber cosmonaut how to dual wield pistols, and once again, the country is rolling out the latest in high-tech robotics with a remote-controlled tank.

According to the Daily Mail, Russia’s tank, dubbed the Vikhr — which is also the name of an anti-tank missile and a compact assault rifle — is completely unmanned. A person can remotely pilot the tank thanks to either a mounted camera or a flying drone. At 22 feet long and 10.8 feet high, the Vikhr is around the size one would expect for a tank. The Vikhr also weighs around 16.2 tons, the approximate weight of a manned, medium-armored tank. One would assume that since the Vikhr is unmanned, Russia would skimp on the armor plating to make it lighter and less expensive, but apparently the Russian military believes the tank still needs to be adequately protected. In terms of performance, the Vikhr is no slouch. It can traverse multiple types of terrains and even drive through water. The tank’s top speeds are 37 mph on flat ground and 6.2 mph through water. Furthermore, the tank can be outfitted with various weapons. It comes standard with a 30 mm automatic gun and up to 6 guided anti-tank missiles, but according to the Daily Mail, the Vikhr can also be equipped with machine guns and a flamethrower. Furthermore, much like a video game, the tank can lock onto targets, which lets the pilot fire weapons without having to worry about aiming manually.

A video demonstrating the capabilities of the Vikhr is available online. Not only is the video popular, but, according to the Daily Mail, the comments section is rife with people impressed by the tank’s power and maneuverability. Please note that the video provided below is not the original version. (Edit: The video I originally posted has since been taken down. I apologize for the inconvenience.)

So, what does the future hold in store for the Vikhr tank? That question is difficult to answer at this point. The tank could potentially inspire other countries, especially America, to invest in and create their own remote-controlled tank, which could save the lives of soldiers since they wouldn’t need to be present inside the tanks. However, given the ethical and moral dilemmas/controversies regarding drones and drone strikes, the Vikhr and all subsequent remote-controlled tanks could come under the same scrutiny as they are essentially weaponized drones that can’t fly. Right now, this is all speculation, but I would not be surprised if the U.N. eventually steps in to create a “remote-controlled attack vehicle regulation” in the near future. At the very least, we don’t have to worry about an AI controlling the Vikhr tank…yet.