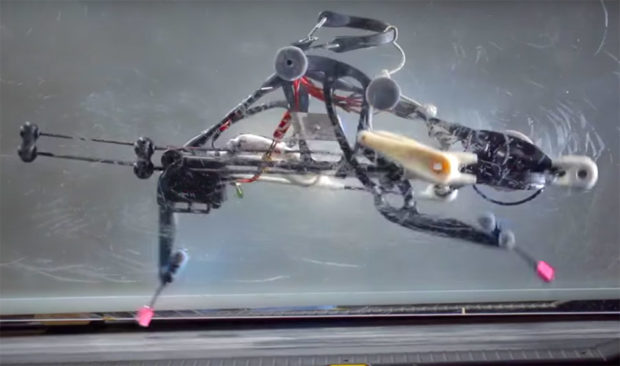 A major hurdle in the field of robotics is making bipedal robots balance without sacrificing speed. Honda’s ASIMO robot can balance on two legs and walk up stairs, but it is very slow. Luckily, researchers at the Institute for Human and Machine Cognition (IMHC) in Pensacola, Florida have made great strides towards creating a running, two-legged robot … pun intended.

Torsion springs play a big part in keeping the Planar Elliptical Runner balanced, as these springs are designed to create “reactive resilience.” What this means is if a leg meets resistance, the spring reacts by making the drive cranks feed more power into the leg until it overcomes the resistance. Similarly, extra power is fed into the other leg, so it can maintain a trajectory that prevents the robot from tripping over itself.

The Planar Elliptical Runner is only a proof-of-concept at this point, but senior research scientist Jerry Pratt believes the robot’s design will have numerous applications in the future. “We believe that the lessons learned from this robot can be applied to more practical running robots to make them more efficient and natural looking,” Pratt stated. “Running will be eventually useful for any application that you want to do quickly and where wheels can’t work well. … Robots with legs will be particularly useful in places where you want a human presence, but it’s too dangerous, expensive, or remote to send a real human. Examples include nuclear power plant decommissioning and planetary exploration. These are very small, niche, markets, though.”

The current version of the Planar Elliptical Runner needs glass walls to keep it balanced on a treadmill during tests, as its stability only applies to its front and rear ends. However, the IHMC is already designing a new version that will be stable to its left and right, precluding the need for such walls. We look forward to what the IHMC creates after it has perfected the Planar Elliptical Runner.