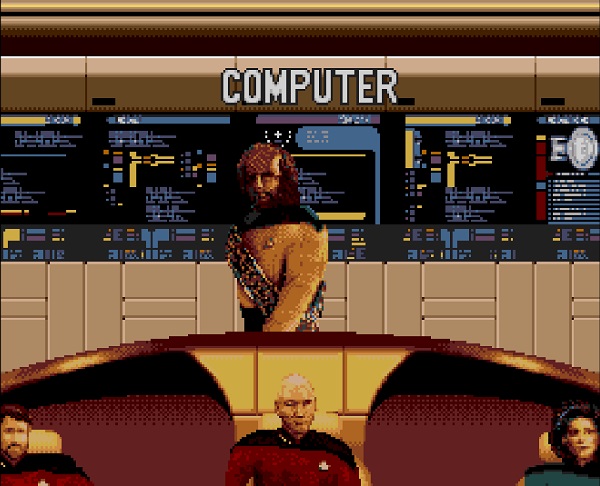 The Fourth May have been with us this past week, but as a lifelong trekkie, the Star Wars holiday is bittersweet. While Star Wars gets the cool points – Star Trek is the franchise that inspired millions of people to become engineers, naval officers, to research fantastic scientific ideas and to live long, and ideally prosper.

I’m just saying, we have teleporters, we don’t have Lightsabers.

Some of the best Trek games haven’t even been Star Trek games. FTL nailed the drama of sending crew members to their death to keep a ship from flying apart while under attack. Star Command had the aesthetic down, and Mass Effect certainly had the intergalactic politics thing well in hand.

But the only game to really have it all – branching dialog, ship resource management, away missions, tactical combat that felt weighty and fun, was the Star Trek: TNG game on The Sega Genesis. This game is so great it even let you dive into the ship’s computer and read pages and pages and pages of data on old Enterprise ships, alien races, galaxies, Thermodynamics, and more. It was the most authentic Star Trek game I’ve ever played.

Take for example the game’s first mission. Following a briefing in Picard’s ready room that sets the scene for the rescue of an archaeologist from Romulan intruders, the entire universe is at your disposal. You can cross into the neutral zone, head toward Borg space, or visit your favorite planets.

Or you can be a good officer, and head to the proper planet to save the person in need of saving. Duty calls, after all. It’s here many players put down their controllers in frustration. After selecting an away-team, you beam down to the planet and…are promptly assaulted by enemies before you can get your wits about you. The control is cumbersome, and the game does *not* give you time to figure it out – it ultimately boils down to selecting your phaser and positioning the away team in a way that cuts off enemies from flanking you as you stun them into submission.

With the enemies dispatched, you talk to the archaeologist, and the writing is superb. You can show concern for her health, ask her to return to the Enterprise, or query as to why Romulans would violate Federation treaties to bother her.

Eventually you beam up and warp away, but not before a Romulan scout pops up and begins firing at you. And *here* is where the game feels truly Trek. While you can immediately go to ‘tactical’ and blow the enemy ship out of the sky, selecting comms delivers a branching dialog system that’ll allow you to provoke the enemy, question *what* they’re doing (and why they attacked the archaeologist), and choose to let them go or not. I did.

How the plot unfolds from there, where you go, what you see, I won’t reveal. But the game was released in 1994 as the popularity of the show was peaking – and the writing, graphics, designs, systems, and details all feel handled with care. The geekiness of the show, and the geekiness of gaming complimented each other. It was a Star Trek game for Star Trek fans – it didn’t need to be all things to all men, it needs to be certain things to certain men, and in that regard, it was. In a time before multimillion dollar game budgets and metacritic scores and countless ways to shoot a game down before it even unfurls its wings, Star Trek: The Next Generation needed only satisfy its target audience and hit the bulls-eye.

20ish years later, the game maintains its charms and specialness. Countless games have borrowed the tropes of trek; the style, the terminology, but few have grasped the thesis that make Trek timeless. More than anything, Star Trek is an optimistic endeavor – eager to show what greatness humanity could be capable of with an empathy-first mentality and unfathomable technology at our disposal.

Star Trek was never an action series because violence was a last resort. It was never sexy (but often times intimate) because it refused to appeal to our carnal instincts. At some point the ideas of duty and exploration and compassion became hokey and outdated and ‘unrealistic’ – and have thus been replaced with a slew of fiction that is dystopian and gray and oft-times infested with zombies, as if humanity got tired of our own vast potential, and would much rather fantasize about the end of it all, versus what greatness we could achieve.

It’s easy to make a game about fighting off a zombie horde, or stabbing your enemy to death with a sharpened twig. It’s visceral. It’s fun. It’s exciting. It’s power fantasy fulfillment. It’s hard to make a game with real power – a game that gives you the opportunity to blow enemies out of the sky, but believes in you enough to suggest that you shouldn’t.

Star Trek: The Next Generation on 16 bit consoles was such a game. Like the series it is optimistic, emphatic, peaceful, and serene. The cynics or realists among us may call it (and the series it’s based on) dated. I call it timeless.

You can play it right now, for free, right here.